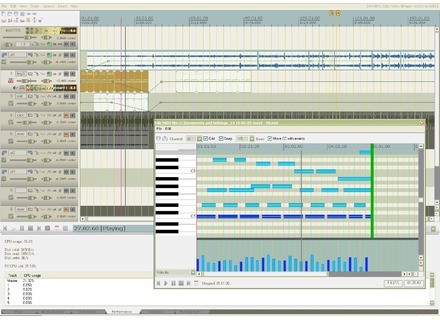 Reaper 1, General Sequencer from Cockos in the Reaper series.

Deajan's review (This content has been automatically translated from French)

Cockos Reaper 1
4
Installation is quick and hassle-free ... The software not weigh more than 2MB in version 1.7x. Audio layer is well cared for, it was right for ASIO and kernel streaming, the MIDI setup is a breeze.
At the beginning we are somewhat confused by the interface is very flexible and quite special, but it is very fast and the darkest color themes (chip - retina massage v3) provides a look rather nice.
Almost all the VST plugins I've tried have worked well, except for a beta plugin and one which can interface was somewhat offset.
When the manual, you must download it from, at least I did not need, we quickly took the game

As for performance this app is great. It loads in no more than a second, uses very few resources, even when provided the wake of FX and VSTi launched.
For a freeware / shareware, I've never seen so many features. Software sufficient for most applications especially for the configs a little slow against a gas plant as Cubase.

For now I think it is the best sequencer free / shareware I've experienced as very complete with built-in MIDI editor, effects included, supports most standard music. Nevertheless a damper on the metronome that when making BPM that does not end in zero, eg 83 BPM, the plays are not all alike suddenly it a little worrying. Cockos team (also consisting of former No. 1 and current Winamp Ninjam programmer) is very reactive and released a new version almost every 2 / 3 days, so hopefully soon they will settle by this defect.

vanpet's review (This content has been automatically translated from French)

The manual is woefully inadequate: in translation of a wiki ... it's getting better day by day, but it is not as perfect as usual with F1.

Allows you to run a large number of VST by its lightness: a must!

Ultra-low latency, many functions ...
Frankly, after going through Cubase, Reason, Fruityloops and Sonar (versions in more or less commercial), I thought a good freeware - better than some commercial software - would do the trick!

When I write I need to work quickly, so Reaper is perfect!

Free, good ... Paradise!
Did you find this review helpful?yesno
»

See all 5 photos of Cockos Reaper 1 »