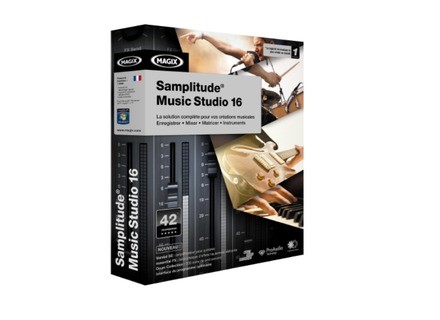 Magix Samplitude Music Studio 16
5
Super simple installation
No incompatibilitbr /> working on version dmo (by registering there has access to 30 days without any restrictions), I did not even need manual

I discovered Samplitude (pro) by chance there is of it a few years (the sellers swear by Cubase and ProTools LE ...) and owner of Sam6Studio I needed some something more rcent (ASIO Vsti) and Sampro is too expensive for me.

I test all versions of MUSIC studio, and have all abandoned with regret because they all had problems of standards ...
I adopted from the Sonar Version3 until 8 ...

And I have the experience resounds Sam / MS Version 16 this month because there is now a dmo completely open with no restrictions ... AND Lbr />
Discovery <img class="smiley" src="/images/audiofanzine/interface/smileys/icon_mrgreen.gif" alt="mrgreen" />

Hyper complete, rich soft, with excellent virtual instruments, a modern interface, think back, with a superb design dsormais (Carbon), a soft as stable and reliable as Samplitude Pro ...

For 59euros ... How to say? In principle no hesitation ... but I bought Sonar8 there is little ... so I interviewed again and again ... At first when adj considr as an app major, why would you need a soft considr as a minor?

it is that yesterday I started up a test in Sonar8.31 and before leaving my home, I closed the project to reopen after a few hours, BAD SURPRISE: Tracks MIDI is still the virtual instrumentals but also no connection between the two, redo everything from scratch ... ... Ecoeur I spend the same project under SAM 16 ... I close, I open, no worries ...

Not to mention that if during the mix instrumentals Sonar seem monstrous, the listening ... uh how to say? Those Samplitude crvent literally pregnant ... Not all are good but some are standards ...

Goodbye Sonar, Samplitude I dfinitivement password and upgrade to Sam11 in order for a super price reduces

Simple and clear interface, flawless management of plugins, good virtual instruments sold with the pack, a price "ridiculously" low. My choice is made. Samplitude Music Studio 16 and Samplitude 11 without a doubt.

If I had switcher 100% I would opt for OS X Apple Studio 9, not for anything else but for PCs, the series Samplitude, including dsormais version "base", I personally have never seen better.

Magix has normment worked on his product range beginning, bringing a level I think ingalable (for this range). Therefore forget one hand the errors of previous versions, and secondly, not to confuse between price and quality. I had much more expensive apps (3X more expensive 6X) hands, this "small" Samplitude is much better ...

I highly recommend testing Sam MS 16 dmo 30 day, not to Tlcharger virtual instrumentals to test everything. It would be a mistake not to test the ...
Did you find this review helpful?yesno
»

aerato's review (This content has been automatically translated from French)" Magic ... forgiveness, Magix"

I am quite familiar Magix products, their qualities, their stability but also their prices. I moved as much by Pro Tools, Cubase, etc. Cakwalk. not always in the same budget and yet much less complete

What I like most? this app all simply to complete as possible at a price that does surprisingly little to bring the musicians in the world of Magix. This is not a toy but a serious software, built for incredible stability and quality for its price beyond reproach. As I said, I tested many other brands before and now I swear by Sam and product quality Magix and it is no accident.

The least. we could find things, but let's be serious, at this price is impressive there already.

Magix Samplitude Music Studio 16
5
Software is very stable and complete. It works with all VST and VSTi. He always installed without a problem, even in older versions.
My use is mostly in multitrack audio sequencer to record my synths on separate tracks simultaneously and guitar in several tracks as well. Never any problems.

Quadcore with 2 500 GB HDD and 2 GB of RAM, mixing desk with integrated audio interface in Alesis Multimix 16 firewire. Simultaneous recording of multiple audio tracks in stereo 24 khz bits/44.1 .... everything is OK and does not crash ever.
By noon, it works well too. No latency on the VST or VSTi.

I have been using the 2002 version I believe, and I had all the versions since. He is improving every year with new features. I think at that price, it has no equivalent on the market.
I use it mainly audio with a table Alesis Multimix 16 FW. I record in 24 khz bits/44.1, sometimes 10 simultaneous inputs (5 stereo), with the software or internal effects VST, VSTi sometimes, and he never gave up. software is very stable, with whom I made four albums all sold, and no one has ever found fault with the quality of the recording. Effects and instruments included troubleshoot good (Revolta is really nice), and drum machines integrated (Robota. ..) sounded really good. And since it integrates perfectly VST of all kinds, in addition to being editable in any direction, I do not really see anything negative in this app ... In short, considering the price, if you want a full sequencer ... go for it!

passionvinyl76's review (This content has been automatically translated from French)" Excellent! for what I did ...."

Magix Samplitude Music Studio 16
5
to answer questions, the installation is no problem, I have no conflict with my hardware, the manual should be read before using the software or databases so you have that I did not, c is the same for the config in my case I use it regularly because I was looking for an app that allows me to play the music instinctively, I'm DJ foremost, my gear used with Music-Studio is primarily made to remix or bootleg, midi files I get home and then the sequence is running on my MIDI outputs to other samplers and keyboards to be recorded on another PC or Soudforge Acid through my mixer, then I re-mastered with Sonar Producer X1 on a 3rd PC

for me it nikel! I will perhaps one day on cubase but not right now anyway

Did you find this review helpful?yesno
»
Read the 8 user reviews on the Magix Samplitude Music Studio 16 »