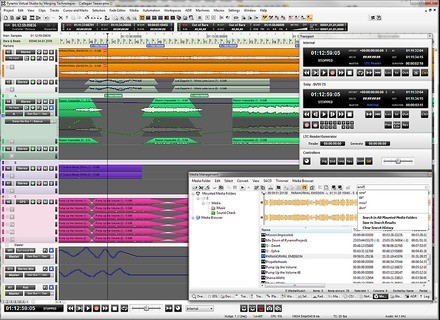 Merging Technologies Pyramix 7.1 + console/ surface de contrôle Ramses
5
Installation is no particular problem. But it remains longer than for other sequencers. Here, we have to do a big corny blithely mixing the soft and hard, Dsp + control surface, and a system for storage and video playback.

The software runs on Windows Seven, the stability of the whole does not suffer any particular comment. Anyway with the installation used, the notion of stability even though of course this is an important point, is not as prominent as other sequencers (see global opinion).

A sequencer professional par excellence, the Pyramix version 7.1 is the logical continuation of the excellent version 6, and passed again to the next level! It still includes the famous "Mass Core", which gives the system tremendous opportunities in terms of number of inputs and outputs, as many as 512 channels and never ride in the sauerkraut. Another significant development in this version 7.1, DSP power can never run out! Cpu where some find themselves still limited to one time or another depending on the configuration, with the DSP-board Pyramix it remains impossible to push them to the end .. And I do not even talk about stability ..
Compared to other sequencers, direct integration of plug-ins in VST standard is managed entirely by Pyramix itself, not Windows, which then becomes the platform in which turn these plug-ins. The result is three immediate benefits:
-You can place plug-ins when desired in the system
Latency-melting like snow in the sun, resulting in a much better response and also the opportunity to listen in real time in a situation of post-production.
Finally, a significantly increased stability.
To work effectively, I think the integration of the control surface called Ramses, who is also a true digital console is required. Although it may seem daunting at first, once we became interested in the layout of controls and functions available, but quickly becomes very logical, at least when one is familiar with a digital console. Moreover, it is reminiscent of certain SSL console (I am thinking of the Axiom, for some reason ..).
As I said before, the system is not that Ramses control surface, so if Pyramix plant, it continues to act as a digital console, and so the signals are passing. The surface itself dedicated controls and assignable mix in perfect balance.
For me it is the production tool of choice, even if Pyramix can experience some compatibility problems with some stability see plug-ins (it is never too serious), the team is still there Merging Technology for a solution as quickly as possible. And that is priceless ..
About prices, this is actually an undeniable, but production concerns related to the stability can cost much more expensive. And what a pleasure to be able to light his cigarette preferred a casual gesture and out on the terrace of the studio watching the heavy volutes rising into the air at night knowing that nothing can happen to us, and we work safely ..