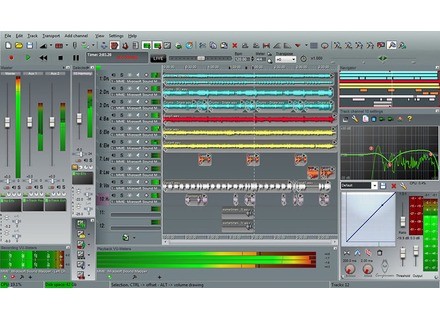 n-Track Software n-Track Studio 6
3
N-Track Studio 6 appears to have it all: multitrack recording capability in a variety of bit and sampling rates, MIDI sequencing, video support, and even comprehensive SMPTE/MTC options. That being said, my first DAW software was Cool Edit Pro, which is still what I'm most familiar with, and because functions are performed differently on this software, I'm a bit clunky with it. The guitar player in my band raves about this software, and it was his first DAW software, so in some ways I regret having used Cool Edit first, since that software is no longer made or updated.

I'm running this on an older Dell desktop with Windows XP Service Pack 2. I do have some compatibility issues, but I think that has more to do with the age of my system than the quality of the software's programming. Someday when I have a better desktop I may get into it more than I have in the past.

Setting up the computer to slave to incoming MTC is not that difficult, which means I can have synchronization between my tape machine, my RADAR, and my DAW all at the same time. This is definitely overkill, but it's nice to have the option.

I still like Cool Edit Pro better than this software, but Cool Edit Pro does not synchronize or do MIDI sequencing as well, which are two functions that I really need if I'm going to bother using a DAW in my studio. I just find the interface to be a bit clunky, difficult to maneuver through, and not as intuitive as Cool Edit Pro, but I realize I may be biased, because I'm not really a computer person when it comes to recording. But, like anything, the more time one spends with this DAW software, the easier it is to find and use all of its functions.

Published on 03/14/11
n-Track Software announces the availability on the App Store of the iOS version of the n-Track audio multitrack recording software.