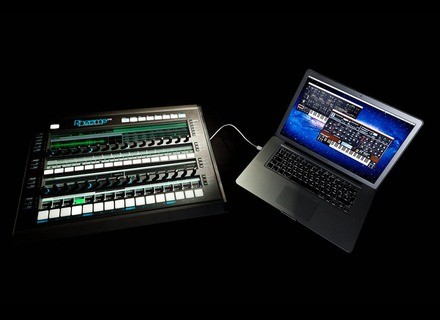 Rhizome LE, Groove Machine from Feeltune in the Rhizome series.

You can still use your VST’s with the Feeltune Rhizome LE but in order to really use it to its full potential you will need to have it working with your computer. That was the main reason that I didn’t want to get it because I wanted a unit that could work stand alone without the computer if needed.

The Feeltune Rhizome LE is well built and has a very clean design and look to it. All of the knobs and pads are well made and I don’t see any issues coming up with this unit at all. I do suggest getting a good case for it because it seems to be very fragile. So if you are a DJ make sure you take good care of this when moving it around.

The software that comes with it does install easily and quickly. It does seem to operate a little different on my PC than it does on my Mac. On my PC it installed quicker but runs a little slower and on my Mac in installed a little slower but runs quicker. But it has never crashed on either of my systems and works great.

The effects are pretty good for the price range that it cost. I use them a lot now every since I got a chance to own the Feeltune Rhizome LE.

The Feeltune Rhizome LE is a great hardware and software integrated unit. You can assign all of the buttons and switches to whatever you want them to control in your software. I have used the Feeltune Rhizome LE with about 4 different DAW programs and it has never given me an issue with any of them. The Feeltune Rhizome LE does cost a little more than a lot of other units that are similar but it is more user friendly and better built.
Did you find this review helpful?yesno
»

Feeltune Rhizome LE
5
32pads 32potards 30boutons to select any function whose mixer, sequencer, sampler, live, song, ............ 4ecrans a sampler which is not bad at all!! There intergre effects: compress, equalizer, stereo 6 insert effects for each track, 64 track pattern by which the number 64 also each pattern can be different

not just downloadable manual on the installation site Feeltune a little soft galley I have installed the March 4 before his faith is ok but everything works fine now! functions are accessible thanks to 30 buttons

the sound is nikel! the stereo effect that integrates the mixer mas rhizome is wrong, I like it!!'s equalizer and compressor do their job! the pir if we do not like it but a vst

the fact that some day I MASCHINE I used the native instrument of great but the rhizome is 10 mieu faith!! the + there are too many overflow the moin I saw 2: no rewire and can not put the rhizome as a vst in ableton or cubase, ProTool ....... but I think the team we are well Feeltune out an update!

3 of 10 people found this review helpful

kro-matek's review (This content has been automatically translated from French)" they did!"

Feeltune Rhizome LE
5
View site.
The rhizome consists of an output USB3 which liaises with the computer, but also for the source video screen embedded in the rhizome. That's it.
The rest ultimately depends on the computer you have (sound card and various ports)

The configuration is quite simple.il must install some apps on pc or mac, these apps will then scan your folders VSt to make your plugs accessible from your Rhizome.
The machine is simple enough to grip with many features. It really is a mix between the feeling of boxes in the old rhythms), Korg, Yamaha and other current and softs (Abelton, etc. ..).

This gives a highly ergonomic and truly complete.
Being ableton live user since a while, was really a pleasure to play on the rhizome. It really is much more fun and creative than live with any soft controller.

It all depends on samples and Fx you use, however, namely that the Rhizome includes a comprehensive mixer with Fx insert, bus etc. ..

How long do you use?
Few months, but I had versionUXE before (I went to the LE version because I'm used to the Universe Mac)

I found new features compared to Ableton hand and it changes your life:
First re-move each pattern can be composed of vst samplers or completely different (at the expense of Abelton). One can for example have pattern1 composed of a sampler with 1 Kicka a line of hat, a snare, and 2 with a massive plugin preset A and B then pattern2 totally different (eg with a different sampler kick B ( Kick A Sampler is no longer present), with four massive presets CDEF, a discovery, pro ..) This leaves playability unheard.
More when we pass from one pattern to the other positions of the "mute" or "solo" each pattern is totally independent of each other (we just start with the kick patt ern1 mutated and pattern 2 it will Kick enabled, but the mutated synth for example).

Ability to synchronize the machine with Ableton Live or route audio from ableton to the rhizome and vice versa.

Ability to edit directly from the machine Vst (also possible using a mouse on the screen) and change the bank directly from the rhizome.
Opportunity to play two simultanéments project and ancer in patterns / parts of each.
It really is possible to dispense completely screen pc in 80% of cases!

The software is not a vst .. shame, no rewire (it takes a little tweaking to sync)
There is no possibility to load the samples if desired with the mouse or edit patterns and the piano roll with the mouse (it could be a time saver in some cases no doubt ...)
Vst some name recognition.
Personally I would have added a series of button / knob further as a midi controller with direct access to effects.

How would you rate the quality / price ratio?
Really correct, but the software that are very innovative could be even better, with for example the possibility to choose colors for parts / paterns, the ability to take control with the mouse if necessary directly on the computer, the possibility of choose the position of parts ...

With experience, you do again this choice? ...
Without hesitation, this is by far my best purchase! I know of no equivalent to this day. You dreamed, they did ^ ^! MErci and!

Published on 04/06/12
To celebrate the launch of its new groove machine, the Rhizome LE, Feeltune is organizing a Facebook contest.