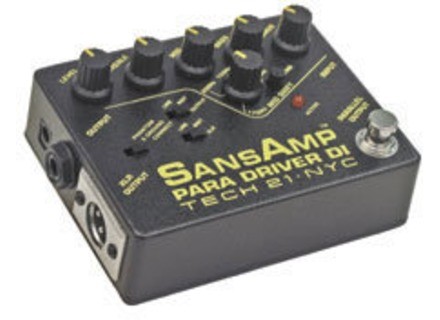 Tech 21 SansAmp Para Driver DI
5
The Sans Amp Para Driver DI by Tech 21 is probably one of the most overlooked but intuitively usefull tools every musician should own. Built primararly to be a Direct Interface, which it does well, it goes well beyond the scope of any normal DI box. This is an analog DI that can be powered by a nine volt battery, an AC adapter, or by phantom power. It offers one quarter inch input, a quarter inch parallel uneffected output, one quarter inch effected output, and one effected XLR output. There is one true bypass footswitch on the pedal. There are six large knobs that control level, treble, mid, mid shift, bass, drive, and 1 mini knob to controll the blend of the Sans Amp simulator. In addition to this there are three switches, two that controll the output level between line and instrument level on the two effected outputs and a third to select phantom power and a ground connect switch.

Unlike many pedal manuals Tech 21 sends a very informative guide to the operation of the pedal and its many components. Along with that there are many examples of setups provided for use with guitar, both acoustic and electric, bass, keyboard, and more. This pedal truely is useful across the range of amplified instruments. The use of this pedal is very straight forward but does require some experimentation to gett the feel of it. The controls are extremely interactive which allow for drastic changes with minimal adjustments. It can be made to not sound the way you want if you treat it as a general tone shaping device as the knobs require a high level of familiarity, similar to the way you would dial in a Mesa Boogie Recto. It is not a deficiency of the unit but a testament of how powerful the shaping qualities can be.

This unit is a transparent or as colored as you needit to be. The reason it is so adept to working across various instruments is it versitility. If you simply need a colorless DI to the board it has it covered. If your a bass player and want to take just your instrument to a house of worship to play it can send a convincing Ampeg sound to the board. It works wonders to eliminatethe unwanted parts of piezo pickups and really anything you need it to do. It also is indespensible for use in a home studio. If you are using an amp for feel and are recording it the parallel though is indispensible for preserving a quality DI track for future reamping if needed.

This unit is a perfect solution to many problems any musician can face in any situation. There are no flaws I can see in this design. I believe this piece is worth every penny and I only wish I had owned it since the day it was built. It operated phenominaly in any situation as long as the user takes some time to know what they actualy own in this piece. I have seen and used a few other DI boxes in the past but none can compare to the toolbox nature of this unit. I would buy it again if anything happened to it but it is built very well. I do not forsee me breaking it anytime in the future. The only regret I have is the fact I never thought much of it before I actually went and tried one. I wish it had been with me since day one.
Did you find this review helpful?yesno
»

Tech 21 SansAmp Para Driver DI
4
Tech 21 in one of the most resourceful companies on the market today They have products in the hands of amateur musicians and professional musicians around the world. They have successfully provided the industry with pedals and effects that have been used to accompany many players rigs and clubs. They have successfully developed one of the most used power amps on the market today. They don't' stop with there but continue to break down the competition with useful direct boxes such as this one.


Sample Settings Included in the Owner’s Manual for :

This little box is a sound man's dream setup for direct boxing an acoustic guitar. This direct box is a great price and a very useful unit that happily captures the real sound of am acoustic guitar all the while blending in the perfect balance of the instrument through the house sound mixer. You will alleviate problems of EQing the right acoustic with the help of the direct box. The user manual is great as well giving you tips and direction on how to use this direct box in certain situations for multiple instruments.

It doesn't stop with the acoustic guitar but branches out towards the electric, bass, string instruments such as violin and cello, and even drums. They have broke it down for you the best way to Eqing this box to get the best out of whatever instrument you are hooking up.

At new these units come in right at around $200, which is a great price for this direct box. These units can climb in price quickly with certain manufacturers and this company tries to keep those prices competitive. I would recommend this box to anyone who need a basic direct box with a few extra features and doesn't want to spend a whole lot of money.

jules_th's review (This content has been automatically translated from French)

Tech 21 SansAmp Para Driver DI
2
Numrique, like any home Tech21/Samsamp, I'm not in technology, so I do not dcrirai all that made this thing say that there is a DI circuit to connect a guitar a table (with a "link" to this signal of rcuprer, type amp back on scne) and, parallle, which can dconnecter or connect via the button at the bottom, a circuit "simulation" of amp: it contains a "drive" an acute rglage - mdium paramtrique - serious an output gain +.
I almost forgot: there is also a command impdance output and the choice between the power supply of the pedals (single 9V) or a power supply fantme. And the output is double, or XLR jack.
I trs clear, is not it ...
The XLR output is a little gadget. It fulfills its function, though.
I wanted to dpart a "Sansamp pedals to sound" to use it as DI, not to be dependent on the DI sound systems, sometimes bad. The product Sansamp (Acoustic DI) no longer exists, it does replace the driver Submitted Para DI.

Use: I think I understood how it worked. The manual is okay. So I could say that the use is easy. But then APRS qlqs hours of sweating, + scne two uses of sound and trs ing with good sound, I must say that I dropped, the pedals. She did not convince me. I bte, I would have to try before. But in that corner a bit (not compltement) palm o I live, the corner stores could not command the pedals for my beautiful eyes. So try to adopt it.
We pass under sound, for the future.

Hardware: the thing with an essay and a traditional folk Dupont, teams of LR Baggs (with prampli, may be the rub is that) a Gibson half cash ES135. Live on sono a HK 1000, the house.
In DI: The Ings told me her (without consulting): weird, your ID, is trsmdium. Am obliged to correct.
In case of effects: not found its correct. I found a "dnaturait" plutt. The Drive is ... not "Drive" ... Ngatif, I am, but DSOL also have this thing home. I searched the pots are sensitive trs, I thought to have found a cool sound, I came back the next day. Dception.
Dception therefore résumé of the situation. Since, for the electric, I took a little amp Vox Pathfinder 15W with reverb (without lamp): see the reviews, I agree with the right notes. And for the sound, I'll try to find a DI box amricaine (Ultrasound), but that is not distributed in France. I have an amp at home, it works well.

You can read above. I guess this case is suitable for use other than the ones I tested. APRS qlqs months passs tell me that even when something is 250 euros must be able to serve me, I came to leave in a corner and forget it. It's a shame, is not it ...

3 of 16 people found this review helpful

zrai's review (This content has been automatically translated from French)

Tech 21 SansAmp Para Driver DI
5
I have this pedal for 2 months and I love it. I use it for my bass (yes) and it is perfect. Settings (acute, medium severe) are accurate. And there is also a knob to blend and drive that provides a simulation of distortion and great lamps that boosts the sound of death! There are not too many switch or knob to lose if there is néamoins compet. I did not served as a DI output so no comments. The case is very solid (it's hand made in the States anyway) so superb quality. Cookies are also present to tell the state of the pedal.

There knob enough to take the lead at the start to find the sound you seek. The notice will help us in that spot anyway. The drive is easily configurable.

I play more of metal and other music that requires power. And the SansAmp is perfect. I lent a friend who plays blues and more pedal prfaitement has adapted. Against it by a foot pedal, aporte a color quite important. I used mostly the drive. I put 10 because I finally found the sound I wanted for a long time.

So I use it at rehearsal and it is now essential. She brings with her a new dynamic and color fully adjustable for all styles and instruments out. It replaced my multi-effects including zoom b2.1 I served mainly to boost my sound and brought a bit of distortion. It is a bit expensive but I think it is a long-term Investment to and I refer this choice in a heartbeat. I advise against trying it for it anyway ...