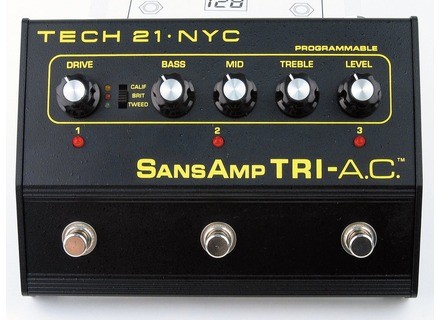 See all 3 classified ads about the Tech 21 SansAmp TRI-A.C. »

Tech 21 SansAmp TRI-A.C.
5
I had the opportunity to test drive the TRI-A.C. at a local music store, but I did not have the cash to pay for it right away. When I returned to pick it up, "they" had already sold the only unit they had on hand. So, needless to say, I will be getting my TRI-A.C. ELSEWHERE...

The amp selector switch toggles between Californian, British and Tweed amp emulations with corresponding color-coded LEDs - green for clean tweed sounds a la SRV, red for Marshal-esque sounds a la 70's rock, and orange for Mesa modern hi-gain sounds a la System of a Down, Korn, Slipknot, In Flames...they are all in there! The factory preset Twin-style sound is clear and strikingly responsive to ones playing dynamics. Very impressive...

Also, of importance is the fact that the slightest adjustment of the tone controls results in a considerable change in tone and sounds. Go easy when experimenting. Don't rush anything. Knobs included on the TRI-A.C. are: drive (gain), bass, middle, treble and level.

Clicking on any chromed footswitch once activates the unit on and you get a bypass function as well. Tweak the tone controls to edit your sound and click the corresponding footswitch twice in rapid succession and the unit stores your new sound to that switch. Try the factory presets first and then if necessary, edit your sound. Experimentation has never been made easier.

Some may find the sensitivity level of the tone control knobs too delicate for their fingers...

Built to last forever. You can use batteries or a 9V adapter.

If someone offered me the three cool valve amps that inspired the TRI-AC sounds for $200 Id snap them up even if I knew they were stolen. Hell, Id probably snap them up for 2000$! But if I did, I still wouldn't have the versatility and ease of use of the TRI-A.C. unit. The sounds offered by this unit are remarkably good. I will be using this unit as an effects pedal, like having an extra three channels for my combo amp, I will plug it directly into a mixing console to see what sounds I can get, I will use it as a recording tool and see how it performs in this capacity.

This is the ideal effects pedal for expanding my amp's capabilities and achieving a killer metal sound.

Tech 21 SansAmp TRI-A.C.
5
Purchased this from Musicians Friend for $149. This unit is the most satisfying analog guitar effect/amp emulator available out there. It sounds 100% tube with tons of even harmonic distortions and very clean Fender tones. I have the Tech 21 GT-2 but the GT-2 is thin sounding and lacking body whereas the Tri AC sounds fat able to isolate the body of each string or group of strings played.

The Tri AC is able to emulate Fender, Marshall, and Boogies extremely well. While the GT2 is strictly for metal heads it cannot cut through like the Tri AC can. The Tri AC can command those single big notes as well as chords - Joe Walsh, Santana, and etc. It mates well with humbuckers.

I prefer using the Tri AC with a 9 volt battery as the AC adapters tend to introduce some AC noise if your electricity is not filtered.

The Tri AC sounded raspy with no body for the first 48 hours as the capacitors were burning in, thereafter, it was tube heaven.

Build quality is very good and it feels sturdy.

The Tri AC is a good start with 3 tone banks +1 bypassed. It sounds or it can emulate tube amps extremely well. It is analog and this gives the warm singing harmonics as opposed to raspy digital effects. I challenge Tech 21 to come up with a similar product with 6 tone banks - 2 for each amp style at a reasonable price of course.

All the pedals I had, this tri-ac is one of the best.
The sounds are very convincing. The gain and tone controls are interactive and therefore provide a lot of possibilities.
I want to say that this is the only pedal that I Tech21 has really enjoyed it.
I never managed to get a decent sound with Sansamp Classic despite all the praise that can be found on the internet. The XXL either was not terrible.
In short, this tri-ac can have 3 sounds quite acceptable emulation Marshall is perhaps a bit better than the Fender or Mesa.

The only disadvantage that I found (and why I had to bring myself to sell the pedal) is that it does not offer enough gain even with dual coils. Unable to make high-gain solos.
Shame ...

Tech 21 SansAmp TRI-A.C.
2
What I was looking for a simple and efficient pedal, three sounds: like Fender clean, Marshall crunch types, such distortion Mesa / Boogie.

The big point is that it is programmable. by a program switch.

Programming the pedal is very simple, turn the knobs to desired sound, you press a few seconds for the switch and it's saved. LEDs flash if one is following close or far from a setting records. Very easy to use.

Ca ... I was not convinced. But not at all. Clean fine, but impossible to have a good crunch or distortion: no body, very little gain. Almost as if I had used a distortion pedal direct into the amp without preamp. Even print directly with a speaker simulator.

It was better before an Axe FX with a full simulation of apli behind, but not silly ...

I dare hope that I received a defective pedal. It was really a pedal which suited me on paper for a small pedalboard simple and effective. I wanted to like it, but I did not have. Very bad.

For the rest, quality construction, ease of use, it's solid.

Did you find this review helpful?yesno
»
Read the 13 user reviews on the Tech 21 SansAmp TRI-A.C. »

Listen to the 7 audio files about Tech 21 SansAmp TRI-A.C. »