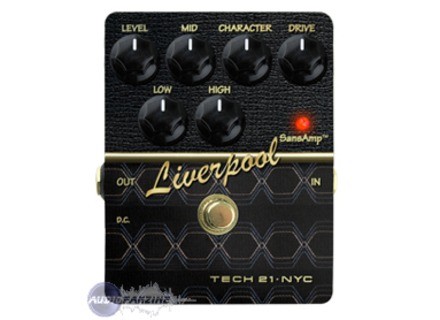 Tech 21 Liverpool
4
The Vox AC30has always been one of my favorite amps. It has a darker characteristic to them them that is very appealing and full of tone. This pedal is the pedal that attempts to emulate the tone and voicing of a British Vox Ac30.

The Vox Ac30 is one of those amps that is really timeless now a days. The reason is that the Beatles used it as their main amps and now many players have inspired to sound like the Beatles gravitate towards the tone of a Vox Ac30.

Tech 21 as done a great job of emulating the voicing of those amps and correctly naming the pedal the Liverpool after the boys in the Beatles. This pedal sound pretty good and convincing enough for a pedal when using it directly to you computer. If you use it in front of an amp it doesn't sound anything like the Vox CA30. And that is the trick to these character series pedals from Tech 21. You need to use it as a direct into protools or whatever for it to retain the nature of the what it is going for.

This thing can do the BEatles tones very easiliy. You can dial it in for a nice crunch ala Brian May and Queen. You can also get a good Edge tone from U2 with this pedal, just by dialing in the character control knob and smooth out the drive a little bit.

Use a nice Fender Stratocaster and get the mids to around 2:00 and the bass and treble at around 11:00. The character should be around 2:0 and the drive at 3:00. Then just set you level to your desired volume. There you will have a great tone for the the Edge tones. Now all you will need is a delay pedal and you're on your way.

At new these pedals come in at around $169, which is not a bad price for this pedal. It does sound like a Vox Ac30. However it sounds like garbage when running in the front of an amp. This pedal only really sound good when using it direct into you computer. I feel it looses some of its character when running in front.

BassWalker's review (This content has been automatically translated from French)" Surprisingly ... :)"

I chose the original version because it is still 30 € less than the other nine which is of no use to me (version 2 can disengage the type HP Alnico Bulldog simulation).

Setting difficult enough to find the sound you like. Indeed, all the buttons interact and can drastically change the sound obtained. So not very easy to adjust but at the same time, this Liverpool offers impressive sound palette.
This type of behavior reminds me of Mesa LoneStar Special is a tube amp that I had there was a time ...
So it's a blessing in disguise, a quality final ...

Used with my one and only 1960 reissue Les Paul Special P90 fitted directly on big Dynacord PA and Mackie mixer.
For direct sound, sounds obtained are simply realistic and feel of the game is excellent!
It's really amazing what 21 Tech managed to design in a small metal box 90x120 ...!

It is definitely an amazing pedal ...
Nothing to do but then nothing to do with all the Boss ME Zoom G3 or other I've owned for the application that I did. These digital pedals I definitely will not do: feeling lousy game and resulting sounds not at all realistic.
While with the Tech 21, the feeling of playing on a tube amp is really close, bluffing. It is obviously not quite otherwise I sold my Z but I use the M12 Liverpool to train me only in my second room and it does really well. I take my guitar, no need to carry my Z!
For those who play only on lamps and occasionally need a solution for troubleshooting and ease of transportation, while Tech 21 is to be considered not to be disappointed.
Regarding me, after buying and trying different things, this is the only pedal that suits me for my occasional rehearsals to 200kms from home.
I guess the other models in the Character series are in the same caliber. But I have not had a chance to check it out!
In any case ... This Liverpool has the merit to exist and offer good qualities.

red-wind's review (This content has been automatically translated from French)

The PDAL is assumed to approach a Vox, but I think it has its own characters, which is far from being dplaisant

As with all pedals, the tone can be adjusted. Except that it benefitted the 3 knobs Bass / Mid / Treble, which is when even much more convenient.
Prsence also a volume knob, and a drive to, as usual there again.

The small non ngligeable particularity is the knob of characters, which varies the type of sound and efficient Manir pretty amazing.

As I said, has not really think of a simulation. This little wonder has its own characters, which is significantly better than all the Pod & co who are content to imitate without personality.

The pedals can be used on an amp, but it can also serve as prampli. And she has plenty to do his rle of prampli, many rglages, and even more thanks to the knob of characters. Useful to plug in sound system, or to make a recording.

"Gets it easy to sound good?" In fact, even without rgler, the sound is beautiful whatever the positions of the knobs. Rglages opportunities are huge, and take some time to be all discoveries. However, the manual shows the positions known to give a particular sound.

I play many styles of music, yet is suitable for the majority Liverpool.
It also respects plutt well the grain of the guitar that is part and plutt is sensitive to changes in volume or tone of the guitar.

I would say that the pedals is perfect for solos, arpges, ranges ... May be more typical in rhythm with a view quite rock rocknroll, depending on the characters and rglages chosen. Pushing the drive and playing strong on legalization, we can approach a the fuzz too. Otherwise I would say blues, rock, rocknroll, pop, and also perfect for funk with great tufts.

There is no sound that I dtest (that is the very first time I can say the same of effect pedals).

I went through TS9, RAT, Big Muff, OCD, DS-1, OD-1, and many others, never really reaching the sounds I wanted. With Liverpool I have at last. It is true that 180 may seem a bit expensive, but it is quickly forgotten when we tried bte. And as I will be able to sell all my other effects except Satchurator, it will soon rcupr.

I would do without hsiter this choice, and I advise you all to try it (having prpar advance a list of rglages found on the internet / youtube / forums).
Try it adopt

Plug and play, the settings are intuitive, but a visit of the manual may be useful to identify the possibility to the pedal. Tom Petty, Brian May and other styles well represented.

This pedal has been tested with a Vox AC30 6/tb, in order to find the same sound as the amp with more drive, goal achieved!
The settings affect the sound dramatically, and the knobs on each. Character very effective Scult the sound is desired.
To find the same sound as the AC30, all the pots except bass at noon to 1am.
The Character knob affects the amount of bass and drive that you want and the style desired saturation but always typed Vox, we pass the Beatles to Queen in a round knob.
Very nice dynamics and musicality without falling into the filthy OD, found in this pedal the sound of a Vox AC30, the frequencies are met and the next Punchy.
In a switch of simul amp hp sounds better in the off position, more bass, more bodies ...

Ultimately a very good pedal amp simulation, lively, very Vox.
I did not try to mix a console but have done with the British from the same brand, this one gave me satisfaction for that use.

Did you find this review helpful?yesno
»
Read the 5 user reviews on the Tech 21 Liverpool »