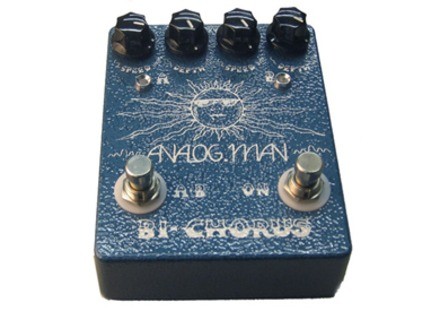 Analog Man Bi-Chorus
5
This is an analog chorus pedal. There is a cool feature with this pedal, in that it has TWO sets of inputs/outputs. There is one set on the side of the pedal (in the traditional left/right positions) and there is one on the top, in order to facilitate the pedal's placement on a pedal board. It has the ability to be powered by a 9V adaptor which it comes with. THis pedal cannot be edited with a computer, and is not MIDI-capable. It is an analog floor pedal, it is not rackable.

The editing on this pedal is easy. There are two sets of Speed and Depth knobs, one on each side of the pedal. There are two switches, one bypass/on, and one that switches between A and B settings. This makes it easy to switch between two different settings quickly, which comes in handy when playing live. One set of knobs controls the A setting, the other controls the B setting. Adjusting the wet/dry mix can only be done by the extremely handy, who have to open the pedal up to adjust.

This is an amazing quality pedal, regardless of what you use it with. I've tried it on Stratocasters, Les Pauls, Fender Twins, Marshall stacks, and have consistently gotten good results. I don't think it works well on Hollow Bodies, but that's not a huge issue for most hollow body players anyway. It's been hard to find a good chorus pedal that doesn't have a bunch of cheesy settings that are basically pointless. this pedal is unique in that every tone is an impressive one, and that it has an extremely versatile range. It can go from an extremely light, barely noticeable effect, to a huge sweep, and it sounds good on both extremes. It doesn't get very noisy either, which is a HUGE selling point for me, as most chorus pedals generate so much hiss that they aren't worth using. Even if you aren't a fan of the chorus effect in general, you owe it to yourself to check this out if you have the opportunity.

I like the versatility of this pedal, and the consistently good tones. I also like the ability to switch between two settings at the stomp of a switch, which comes in handy quite often. This is better than many of the countless models I've tried. I would highly recommend this pedal.

Other Analog Man choruses for Guitar