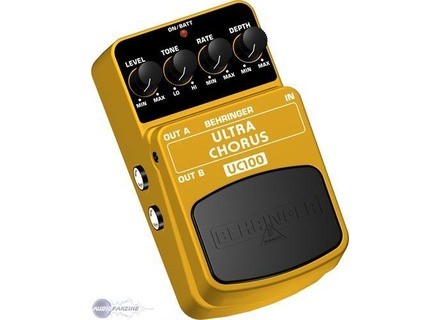 All user reviews for the Behringer Ultra Chorus UC100

Average Score:4.0( 4/5 based on 4 reviews )
Value For Money : Excellent
Not satisfied with those reviews?
Our members also liked:

Behringer Ultra Chorus UC100
5
It really is analog! I opened it.

Operation is easy, but the record is not complete. It does not give an explanation of the use complte stro.

I ordered by mail from Germany and I reu record in English and Japanese. Consumption of the beast (30 mA) is only on the instructions in Japanese. It's pretty typical for Behringer manuals.

Super! It's not so good on all the positions of knobs, but you can make a good sound trs. This may be not the best chorus I've tried but it is certainly one of the best in mono.

The output B provides a sound without chorus, but when you connect a cable to this output the sound of A is not so good and the level is lower. I do not like in Stereo.

Construction is not terrible plastic case and I am not of the quality of the knobs. I even afraid to use it with batteries, it's not a good System to open the battery case.

Good, but for a little over 20 Roros it's great.

MagicJoe's review (This content has been automatically translated from French)

Between one and two outputs
for mine, the output A is with the chorus effect
and the output B without effect.

It is very simple to use, it finds her quite easily.

Cot quality not breathing, the sound is good in an amp ...
against attempts by a Pod is a disaster ... buzz, squiz ... unusable.
And even with the pedals.

Cot quality manufacturing, should not be too much to ask ... compared to other brands really cheap pots background ... srrs may be enough.
Basically the sound is not bad for the price, but not expect a long-term investment ... its not top of the jack and the rest of the plastics.
Did you find this review helpful?yesno

Behringer Ultra Chorus UC100
4
It is a chorus cheap (20 euros)
Basic plastic pedal Apart from that nothing makes him a default that the nivo ...

4 button then nothing conpliquée Here is a chorus. (True?) Stereo

It's a good chorus pti cheap, so that's a side of a polychorus has more than 200 euros in Electro Harmonix can not conparer pti but a fact like that is fun and then there must be more than 3 or 4 times the price for one notable difference Audible and again ... So here
Edit: Infact the chorus is pretty good, I had the opportunity to conparer with the chorus of 50 and ME that of the micro cube and the chorus is doing much better, it is very soft warm my musical taste now.

Well it's a nice little chorus cheap! has not to expect Wonder, either! Throw away but for 20 euros you over if you have a budget tight and that this effect is not the center of your conpositions, like that from time to time in Morco is very nice!

albator651's review (This content has been automatically translated from French)

Behringer Ultra Chorus UC100
4
The pedals can be found in a plastic case.
The buttons are plastic knobs.
The location of the battery is a little space, it is necessary to blow the cover
to put the battery (which is not a book ... and yes that price).
The knobs are strange to the touch, while some are soft, others resist one anymore
and look for the best quality shot.
There is a switching diode ON / OFF.

Ben for such a price should not refuse but should if possible try before, make or break. But when it happens we say that frankly Boss and all other abuses with pedals was 100euros ...