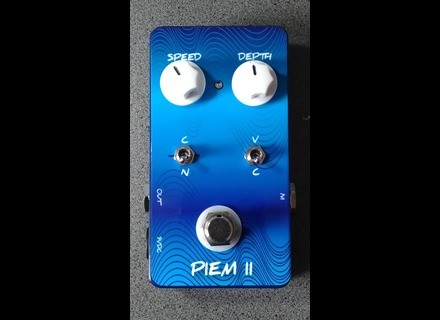 Doc Music Station PIEM II
5
SOUND:
The Piem II produces some lush and ethereal sounds, from classic vibe and chorus to modern prog shimmers, as demonstrated in the YouTube video below:

Unique to the Piem II are the various settings and that you get to choose a Vibrato (tremolo) or a Chorus. And with each you can choose a Classic, Normal or Leslie sound. I'm not sure why it's called Normal, but if I were to compare it to the Classic I would say the Normal mode is more subdued and passive, whereas the Classic is more aggressive (which means controlling the amount of Depth or mix to avoid an effect that sounds too detuned). I like either, as each mode sounds very different. However, what I really like is the Leslie mode, so that your vibe or chorus can have a swirling Leslie speaker type result, which is very 'dreamy' to the ears.

There is some minor noise coming from the Piem II, but only on the Classic setting (common among vibrato/tremolo pedals)... and you only hear it if not playing (and mostly if using a high level of Speed). Otherwise it's minor and not very obvious, and absolutely quiet on the Normal and Leslie settings. The reason for the subtle noise on that one particular setting (not sure why the other settings are whisper quiet) is that the way a vibrato/tremolo works, viz., by engaging and disengaging the signal repeatedly, whether slowly or quickly, to give that phasing in and out quality.

Bear in mind that is just a minor hiccup in such a great pedal... and, again, it’s barely noticeable, but I thought I would bring it to your attention… you might even hear it the odd time in the demo. I've heard other tremolo-type pedals that are very obvious in the 'sshhhh' department, but only when you stop playing. The only other minor glitch is that you can hear the switching when you move from Classic, Leslie and Normal.

OVERALL IMPRESSION:
Developed by Doc Music Station (France), the Piem II is a smaller and newer version of the Piem. Now, just what does Piem mean? One would think it has significance to the nature of the pedal, but Denis, the designer of the pedal, was nicknamed Piem during his teen years, and so he must have felt a personal connection to this vibe/chorus merger. Regardless of the name, it's wonderful to have a vibe/tremolo and a chorus under one chassis. Typically you would not use both at the same time (although there may be some compositions out there doing just that), and so being able to choose between the two, and then being able to choose the style or nature of the vibe/chorus is pretty cool. You can get that Classic or vintage quality, a more modern or 'Normal' sound (less intense) or a swirling wave-like Leslie. Priced at 179 Euro, it's not an inexpensive pedal, but you do get two pedals in one... and in a standard size to save on pedal board real estate. A decent deal overall and it sounds fantastically clear and defined.

EASE OF USE:
This pedal is not difficult to use, but it does requires some tweaking to achieve a proper speed and mix. The Chorus has an obvious multi-instrument sound ( very separated to the ear, as though there are two instruments), which is different from a tremolo type effect with the Vibrato. If choosing the Vibrato, the Speed needs to be set so that it matches the tempo of what you're playing (although nothing wrong with a faster speed when playing slower, although too slow a speed will not pick up effectively when playing quickly). Obviously a more subtle result (to shape your tone) necessitates less Depth or 'mix' than an effect more in-your-face. The Chorus works by doubling up on the signal via detuning. Too much Depth and Speed can produce some wacky results, whereas just enough of either gives you anything from a lush tone to something that resembles a mandolin or 12-string guitar with distinct separation of the notes.

And you can produce significant differences among the 'mode' choices, with Classic being more intense or aggressive in its signaling than the Normal mode. The Leslie is very different from the other two in that it produces a swirling wave effect, which is great for those dream-like ethereal compositions.

RELIABILITY & DURABILITY:
The true bypass Piem measures 2.5 x 4.25 inches (113 x 67 mm) and has an aluminum chassis with a gloss painted ocean blue finish (waves and all, likely to reflect the waves of a vibe or chorus effect). The chassis is a Hammon 1590B model that provides shielding of the electronic card. The LED ‘on-off’ light is far situated from the foot switch and between the two knobs (Speed and Depth). The footswitch has a solid click to it and is somewhat close to the switches to choose between Vibe/Chorus and the respected modes, and so exercise a little care when stomping. Likewise, the guitar cable input and output, as well as the power input (standard 9V DC), are located on the sides, all of which necessitate some obvious care and caution to prevent strain on the cables and inserts. The plastic knobs for Speed and Depth are of heavy construction and the pots are of good quality when turned. The audio components comprise of carbon resistors, Wima silver mica capacitors, and the Piem II is protected against over-voltage and reverse polarity.
Did you find this review helpful?yesno
»