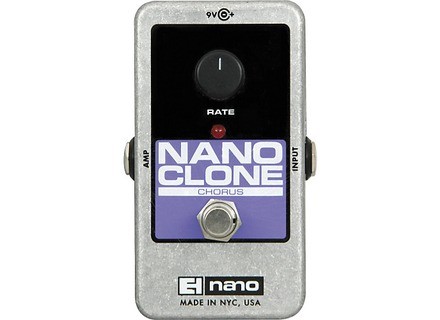 Nano Clone, Chorus for Guitar from Electro-Harmonix in the Clone series.

Electro-Harmonix Nano Clone
1
The Nano series from Electro-Harmonix (EHX) is know for going back to the basics, with as few controls as possible. This is so true. On the Nano Clone Chorus, you get the mandatory 1/4" jack inputs and outputs, the on/off switch and a rate knob.
You give it some power from either a 9V battery or and AC adapter, plug in the chords, hit the switch and adjust the chorus rate. Then you're up and running.

Should you find a need for a manual for this simple pedal, you might want to consider wether or not this is something for you. It can't get any simpler then this. They have even taken away the mix and level knob.

This is the main issue with the Nano Clone Chorus. When you first get a hold of the pedal, you might think that this is really nice. But then after some time, you wake up and realize, that you actually payed a lot of money for nothing.
Consider this: You've bought a chorus pedal, it does the jobs it's supposed to do, but you actually don't really have the sound that you're looking for. You might want the effect to be more subtile, but you can't! EHX won't let you dial down the mix of this one. You might want the depth of the chorus to be bigger - well you can't. EHX won't let you.
Essentially, you've let somebody else dictate how your sound should be, and they only let you decide, how fast the chorus needs to be.
If that wasn't you get a buzz when using a battery. And if you use a power supply (AC adapter) you get a sound similar to a hair dryer, blowing in a tunnel underneath an old castle!

Don't support EHX through the Nano series. Go get some of their much better products. You might as well decide to light a fire and burn you 65$ in that - at least you get some heat out of that.
If you're into some kind of psychedelic electronically generated buzz sounds then look no further. Everyone else - stay as far away as possible from this pedal!
Did you find this review helpful?yesno
»

bounitos's review (This content has been automatically translated from French)" Not worth any more."

Using extremely simple because only one setting available.

The chorus is quite successful, it is the sound EHX unambiguous.
But it's a shame because the volume dramatically lower switching effect and a rather unsightly breath accompanies it.
The absence of additional settings makes the pedal hard enough to mix after a distortion or od (especially when no effects loop). Custom sound is pretty clean with a guitar in not too powerful (But then you have to climb behind the volume and blast is only over this), but with a guitar with a fairly high output level sound is quickly unbalanced . (Same effect with od or distortion)

I've had two years.
I chose it for its small size and low price. But I have trouble to use it properly in a set to causes of its defects mentioned above.
If it was me again I orienterai another model ... (I have no specific in mind).

Electro-Harmonix Nano Clone
1
analog chorus ultra simple, true bypass, that's good
engages as soon as it's a plane in flight, a continuous murmur which makes its unusable except to seek his shit ...

1 switch
1 knob, you can easier

the chorus is good, a little low (loss of volume) but ok
the overall sound is zero because of the breath
better to save a little and buy something else

I've only used the time to sell, no interest
not to buy, in my opinion

Electro-Harmonix Nano Clone
3
A very basic chorus, a knob, turn and it's effect, nothing very compliqué.La pedal is solid, it's EH small, so some small advantage that fast but aside because we focuses on the sound quality, while the interest and have a small, convenient, efficient, cheap, with its sick.

Operation is simple and classic, a foot switch, ON / OFF Ouffff it's hard you press a button.

Haaaaa, the subject was treated more than I'll just give my opinion, and it's like, I've noticed that this pedal is rated poorly on the pretext that she had a bad sound, "Well, it's true "is not the best chorus I've heard, but I finally found that the judgment is very Severt, as well adjusted (knob internal and external) you get a clean chorus sound.

So I will be less because I Severt for me it does its job for 25 € I invested.

For the Global title sums up my opinion, it would the road when you come to the set with the other effects.

Personally, I do not say what I pensse Top but we has a simple, cheap, and just for amateurs whose sound is not perfect prioritée.

Did you find this review helpful?yesno
»
Read the 17 user reviews on the Electro-Harmonix Nano Clone »