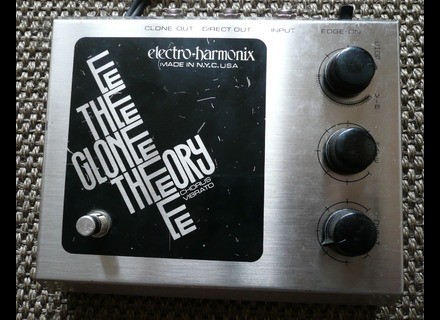 The Clone Theory Mk1, Chorus for Guitar from Electro-Harmonix in the Clone series.

Electro-Harmonix The Clone Theory Mk1
5
This is a really classic-sounding pedal, and in fact it was one of the more popular Electro Harmonix pedals before it got discontinued for a little while. Now it's back in all its glory! This is a chorus/vibrato pedal which makes it kind of a cool combo pedal. There are 1'4" inputs and outputs (there's an option for a stereo out). It's an analog pedal, and as such, cannot be connected to any computer or MIDI device. The pedal is also not rackable at all.

Using this pedal is pretty simple. It has three modes, two chorus and a vibrato. There are two other knobs that control depth and rate. The interesting thing about this pedal is that the first chorus setting doesn't actually allow you to change the depth, just the rate. It's set to what the staff of EHX believes is the best sound. The second chorus setting does allow you to change the depth, as does the sole vibrato setting. The manual explains this pretty succintly, and it is good to know this when using the pedal as it can get pretty confusing when you move the depth knob and it doesn't do anything when on the first setting!

I like this chorus a lot. There's a whole lot of variety to be had here, going from subtle, barely-there chorus all the way to whacked out, out-of-tune madness. I tend to prefer the former sound, and I found that this pedal has a lot of wiggle room to find the perfect tone. I could say the same about the vibrato, but I'm less picky about that in general. In fact I'm not as much a fan of the effect in general, as it tends to be distracting to me, although it doesn't sound great in old classic recordings like "Rumble" by Link Wray. I'd have to say it's worth it just for the chorus but don't sleep on the vibrato!

This is a pretty solid pedal. It's not the most expensive I've seen either, so I'd have to say it's a pretty great deal overall, especially considering there's the option for stereo! I'd say if you can find it used, great, if not, it's not really a bank-breaker anyway, so don't worry about it. Not sure if it's the best I've tried but it's up there. Definitely recommended.

See all 13 photos of Electro-Harmonix The Clone Theory Mk1 »