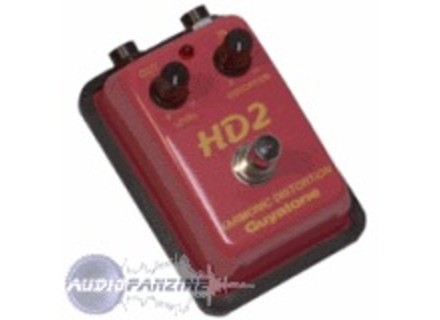 View other reviews for this product:
Bon bah is the Guyatone: it is 5 cm by 4, it's tiny, it fits in the palm of the hand of a kid of 10 years in large ... In short, seeing that you say "haha, terrible, they make effects pedals for sctroumph now! Look how she Schtroumph the disto there!"
An entry
Output
2 knobs (the min): Volume and Gain
Cell only works, but on the other hand saw what she eats (I never changed the battery and it is also radiating tjr)
LED for On / Off

While the small size of the pedal will totally appeal to some, it allows home from a friend in the pocket with that is that the happiness of that side. That said it's going to annoy the other. Genre vs. doing so in the scene (already you choose this pedal or not There's little chance) it will generate something having to look as big as a can of sardines.
Other than that it s'aggripe much ground.
Y 'all need good masochists who say "bah yes but if you shoot in it flies?"
Well not only did you shoot in poor guy and that's bad ...
Finally my opinion is that it produces not only Guyatone pedals that are made to go to ground. If they are so small and simple, it's not for nothing, because embedded in a skyscraper one can store 5 alone. That's what I do with this one, it cost me € 20 including knobs and switches and basta, it's wonderful, it allows me to go from light to saturated PROGRESA.

Then the distortion of schtroumphette it is what?
Ben's simple, it's like a small Pimousse small but strong.
It's amazing, the gain knob cranked you get a totally correct distortion for the price (new € 60). It is better and warmer than the equivalent in Boss, far from it. The distortion itself is altogether traditional but it is what is asked eh ... It's a fairly dry at the root but can quickly become fat (like 99% of distortion in fashion today) by slightly increasing the bass of your amp or equalizer.
In short, great sound quality level

Global opinion?
- Small
- Consumes very little
- Encrusted in perfectly with a scraper
- Its totally okay
- € 60 nine
- It's nickel, no complaints.

I put 9 because, overall opinion can not really put 10.
Thanks to Guyatone, it will sctroumpher in the cottages!
See the source
Did you find this review helpful?yesno
Cookies help us improve performance, enhance user experience and deliver our services. By using our services, you agree to our use of cookies. Find out more.