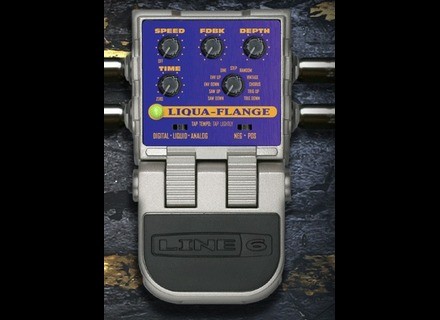 Liqua Flange, Flanger for Guitar from Line 6 in the ToneCore Pedals series.

Equipe B's review (This content has been automatically translated from French)

Line 6 Liqua Flange
5
Effect modeling combining several flangers: standards and others.
Effect with exit STREO if you have a stereo box (line6 effects are detachable on the ToneCore, so he must be put in a stereo box otherwise it passes but only in mono.)
Possde also between STREO (convenient because the loop of my amp may be in stereo)

There are a bunch of knobs, suddenly the sound edition is far from easy:
There are 12 forms of flanger or you can set four parameters (feedback, speed, depth and time) it adds 3 MODELS: digital, liquid, operating on the analogue signal. But in addition there is a button polarity (neg-pos) for the signal delay.

Difficult to retain the head several settings. Small positive for line6 who had the good ide to three examples in its manual settings (like many other brands) but in addition put 3 "schemas" of the pedals without adjustment to record his (made to walk the photocopier if you want to remember various settings)

It's just the problem sounds are simply enormous, but I have not had a chance to meet two times those who had made MARER during my regular hacks.
It is facing a machine that can CRER sounds really special, and I love it.
Sounds are tellements impresionant I keep my boss HF2 (high flanger) for easy adjustment of flanger like that I can set this pedal sounds much less common.
Petit point ngatif, the output volume is REALLY DIFFERENT MODELS about 3, particularly the digital increases tremendously the amount of released if the feedback is a little pushed.

I've had four days and I'll probably make samples.
I love the sounds that have compltement dignues can get while still having classic sounds.
I had trouble with the number of knobs but it must be fun to ca.
Report average quality.
Last small point (not least) the pedals possde a double switch: if it is pressed tap tempo, pressing it harder than it disables the effect, have to take the shot mine nothing, but it is a practical, no button to be turned in or even tap tempo pedal Annex connect (very well when trying to save space on the pedalboard)
Last two small point: it weighs a dead donkey