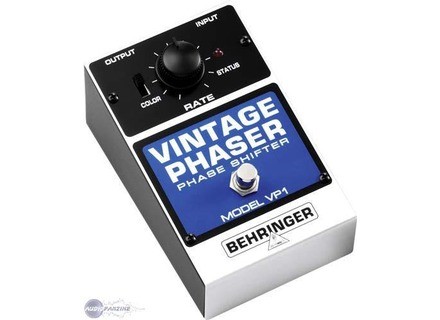 Behringer Vintage Phaser VP1
4
Behringer's Vintage Phaser VP1 is an effects box that I've used with electric guitar. The pedal is a cheap option to get a gritter sounding sort of phaser pedal. I don't know what, if any, pedal this is modeled after, but the look definitely reminds me of an Electro-Harmonix pedal. The VP1 has a standard make up with 1/4" connections for input and output and a nine volt power supply jack. It also has a battery compartment, and it isn't rack mountable since it's a foot controlled pedal.

Using the Behringer Vintage Phaser VP1 couldn't be simpler. It just has a large knob for setting the rate, which gives you ten different points to choose from. It also has a tone switch, but essentially the rate knob is where you'll get your differing sounds from. That's pretty much all you'd need to know, so a manual shouldn't be necessary for most users.

The sound of the Behringer Vintage Phaser VP1 is actually not too bad. Generally I'm really not a fan of the way Behringer pedals sound, as they seem contrived to me, but the VP1 sounds okay enough. I wouldn't use the pedal for recording myself, but if you want a super cheap phaser pedal to get started with, the VP1 will get the job done. Even though there aren't many parameters to work with, it's actually possible to get a good amount of differing sounds just from where you place the rate knob. I like it best for slower phasing that's more subtle, but it's possible to also get sounds that are more rotary reminiscent. The only problem with the VP1 in terms of sound quality is that you will lose a bit of signal with this pedal in your chain.

For a pedal of this price I certainly can't do much complaining, but if don't expect too much from the Behringer Vintage Phaser VP1 you'll most likely be pretty happy with it. It's fine for getting quick and easy phasing sounds for your guitar or otherwise, but it's definitley not on a professional's level. I'd recommend checking it out if you're looking for a cheap phaser pedal to add to the mix, but it might also be worth it to spend a few extra bucks on something like the Boss PH-3 or the MXR Phase 90...

rockyou's review (This content has been automatically translated from French)

Behringer Vintage Phaser VP1
5
Phaser analog type (looks like a replica of a great brand with Uncle Sam??)
1 in 1 out of shame stro t have fun
1 x 9 volt power supply (watch the polarity is reversed it as a boss for example)
a true bypass (the switch is a bit soft for my taste I have the habit of those in the marshall)
The knob seems a bit cheap

The sound that it is really surprising is deguage the total aluminum looks like the original (I took the test with that of a friend is bluffing)
with the rate knob on tourn the first half we obtain a sound trs funcky the deuxime half offer a kind of leslie more or less pronounced according to the race, this is the best effect clean with reverb or delay the space rock is a pure state of more playing with the tone switch can be obtained spectrum trs interesting (the jet taking off from a discrete phase trs)
Listen distortion in the intro of "One Vision" by Queen and you have a apperu of what he can do (certe Brian May uses a phaser foxx foot found today).
this test does is a distortion: in fact I have a vox ac 30 and with my les paul sound is almost identical.

I bought the DS saw its output taken I did not even hesitate
branch once I explain the surprise I do not part with it here unless you find a tta foxx foot phaser has a reasonable price
The small catch is the switch and knob that's a little cheap for my taste
I think if any change is possible once the opration.
for those who are interested in this product I suggest you feed it with a transformer because the battery is a banish
behringer j'espre that will continue with this in mind and we get new pedals in the same version (well a lot of good brand pedals at reasonable prices intelligent calculation of production cost and selling it as some brands so I would not cite the names)
case follow

sid.ojeda's review (This content has been automatically translated from French)

Behringer Vintage Phaser VP1
4
A phaser with rglage the spleen (the big button) and a intrrupteur two positions (feedback in-phase and out of phase).

The knob and the switch seems a little feeble (see the last).

Location for a 9v battery and an AC adapter inlet.

The use is very simple, there are good sound in two minutes.

Intrrupteur with the high position (phase), as long as one does not Exceeds 5 on the knob, you get a sound and well trs flattering round perfect for funky rhythm well. As against the 5 dl, for me the sound becomes a slurry infects.

With the int in the down position, the sound is less Features and more discreet and the knob may have up to 8.

I have the pedals for one day. For 40, the pedals is a good investment, I think even the fiddle a bit to the amliorer.

Overall, I trs boring fast modulation effects, I am glad trs because it allows me to diversify its not that I feel guilty if she stays one month in the closet.

In the end, the pedals has a trs good sound as long as one does not push the knob too.

damien514's review (This content has been automatically translated from French)

Behringer Vintage Phaser VP1
4
Phaser is an effect for guitar, bass or keyboard ...
This is clearly a copy of the sound and cosmetics "small stone" Electro Harmonix.
It's 100% electronic.
2 connector jacks In / Out 6.35 "
Metal housing
standard 9V connector - tip + ring
Note the handy battery cover that do not disassemble the pedal to change the battery.
Made in China, recess for the price (36 € to 45 €)

Configuration very simple.
You plug it regulates the speed of oscillation with the knob and if we want we reverse the signal phase in the mixture wet wet / dry with the button "TONE" is "COLOR" at EHX.
not require manual is instinctive.

The pedal is very very convaiquante. I use it on guitars, bass, rhodes.
Honestly other than the potentiometer should not turn the foot because it is the Camelott from the Electro Harmonix, it's worth buying for small grants that can not pay € 40 more in the SMALL STONE.

Circuit-level electronics, is based on a pair of:
LM13700 - Dual Operational Transconductance Amplifier with Linearizing Diodes and Buffers
from National Semiconductor
http://www.national.com/pf/LM/LM13700.html
and a single OTA that operates in the same way as above.

It's a little different from the electrically small stone which revolves around five simple OTA CA 3094 or CA3080.

The result is the hearts hearts, because basically it happens electrically the same.
The Vintage Phaser circuit is smaller because many components are chip surfaces. to repair it will be necessary to forget, especially since the PCB is double sided.

Basically the small stone is very typical, you can hear this effect on many of Roy Ayers rhodes, rhodes on Led Zepplin "No Quarter" for example, Funk and level guitar the best example is that of Nuyorican Soul "Sweet Tears" with Roy Ayers (again decided) ...

The Phaser is moist and tender 70s. It's much more colorful than a MXR Phase 90, which is more subtle. Behringer also prepares a clone to be released soon.

I put 10 because I love the small stone phaser, which is so typical and the Vintage Phaser sounds the same, with the same color.

The sound is clean, maybe even more than the original.
the potentiometers albeit fragile does not crack, it's the same for interuptor. If you're the type who plays with his Punk pedals Take the small stone, if like me you bought this for use in a studio on the hood of your Rhodes go for it in your favorite store.
I'm not a pro behringer because I like beautiful vintage stuff is expensive, but I am against not one to slam € 100 in a phaser which costs € 37 for the same sonic result. Some purists will say that the sound is more blah blah blah blah or too little, I assure you that it is mistaken.

Note that I struggled to find in Paris. Referencing the many shops on their site but the only one who was in the shop Bass-Center in Pigalle.

I put 8 because of the potentiometer quite fragile.
However for bricolos, you can put a good pot 'metal.
I put pictures on the forum for those who want to see the guts of the beast.

Did you find this review helpful?yesno
»
Read the 5 user reviews on the Behringer Vintage Phaser VP1 »

Other Behringer phasers for Guitar