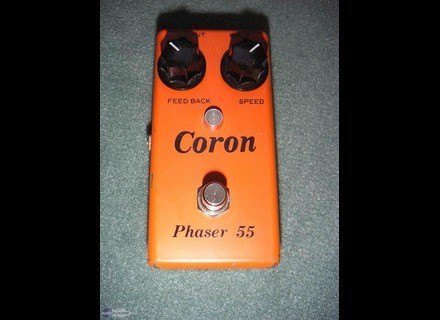 Phaser 55, Phaser for Guitar from Coron.

A 1981 Coron brochure
Phaser 55 is an electronic sound effect instrument to provide phase shifting: the similar effect to reslie speaker sound.
You have a wide range of phase shifted effects with speed control.
Also you can have a Feed Back control, and you can get Feed Back sound by adjusting its level.
The rugged push switch allows you to switch in and out of the effect.
Dimensions : 4 3/4" x 2 3/8" x 1 3/8" (12 x 6 x 3.5cm)
Controls :
»

Coron Phaser 55
5
(Originally written by barvador/translated from Audiofanzine FR)
Copy of the original MXR55 phaser. I own two of these effect pedals (old versions without LED). Only one of them has a PSU connector and I power the other one with an external PSU via the battery connection.

It's an analog Japanese product so it sounds warm and has a good manufacturing quality.

Every setting was usable with the first pedal whereas the second one has a defect and the oscillation speed is not audible anymore with settings beyond 12 o'clock. Perhaps the problem is the PSU. Extremely easy to use.

The first pedal sounds great: it's responsive, warm, doesn't produce too much noise, in short it's an awesome product. The effect sounds vintage and analog. There is virtually no level loss compared with the Small Tone and the Phase MXR. The sound is not fully transparent and quiet but it's not a TC Electronics or a studio device.

Apart from it getting broken, the only con I noticed is that the oscillation is somewhat curious, it's too fast and a bit synthetic. The rest sounds great.

The sound of the second pedal has nothing special. The effect has a lower resolution. I bought the second one on ebay because the first one (also bought on ebay) got broken after three months! The brand new battery started to overheat during a rehearsal and the pedal never worked again. I took it to several technicians and they all said that the components got old and broke. In short the pedal is dead. Alkaline batteries didn't exist when it was manufactured. The power to the other one is supplied differently and I never tried to power it with a battery, I always used my customized PSU. The sound is much worst than the first one so I will try to customize it... Who knows!

The sound is great and has more character than the very renowned MXR.

It's expensive. If I could choose again, I don't know... I love Japanese effect pedals and I think I would buy it again if the first one still worked. It's nice to have a good phaser.

On the first pedal, when you remove the housing to install a battery and change the broken condensers, you'll see a hole in the circuit board to access a small dimmer. You can adjust it with a small screwdriver. The control gives you direct access to the oscillator, which opens new possibilities. You can choose between a smooth or strong oscillation centered around the low or high frequency range. This explains the lousy sound. I've found again the sound I like. It's magic! To keep it short: it has no cons, pedal 1 = pedal 2. I already said that Japanese make very good products... I give it a 9!
Did you find this review helpful?yesno
»

Other Coron phasers for Guitar