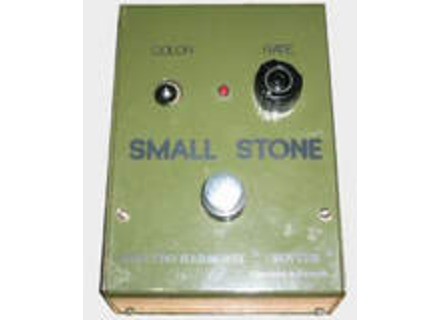 Small Stone Sovtek, Phaser for Guitar from Electro-Harmonix in the Small Stone series.

zingzing's review (This content has been automatically translated from French)

Electro-Harmonix Small Stone Sovtek
3
Phaser manufactured by Russian Sovtek under the leadership of électroharmonix.
Much of the analog jack rustic simple
Note: the power supply is 9 volts with a transformer whose record is a small jack, not necessarily easy to find I've dabbled with at the time later I found a good quality is important because the breath a little annoying with the batteries or transformers my house with the last diparus.

Obviously very simple: a switch for the color of the effect / 1 for the speed of the phaser / 1 Footswitch engagement.

The sound is ultra-typed hell is really a vintage FunkyBox groove that by itself it is clearly seen between Ike and Tina Turner drag a nervous rhythm and sweet at the same time or if you push the effect with a vocal mic is the universe of Strange Days The Doors with a song swallowed by the effect. In short the SmallStone.
But there's a catch ........

The problem is the construction of too poor quality is what makes the sound of agreement, but the shortcomings are too numerous,
the battery blocks broke when I put the first pile ten years ago, and the potentiometer knobs are not supportive (which never happens!) so the rod and slide the button and rotate in the empty and to return it we come quickly to force especially on stage and then it's not very pro is not reliable, the switch by Color cons is disproportionately strong we believe in hand-cut melting incredible. In short anything, now it no longer works and that's a shame it is better to turn to other versions more serious in terms of construction, for my part I hesitate between acquiring another or "credibility" it into
changing the potentiometer that is dead and a few other mods becaufe when it works it's magic .....

Small correction to the argus displayed when I bought this pedal brand new for 500 Francs at the time (75 Euros) and aged rather badly
argus then seems a little off ... 40 euros for one in good condition is more reasonable.

Other Electro-Harmonix phasers for Guitar