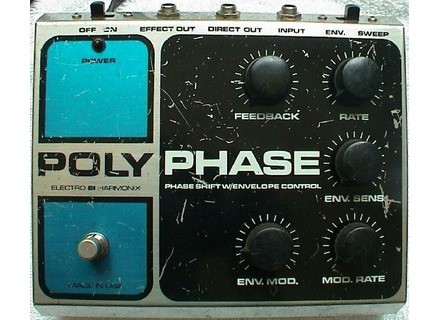 Electro-Harmonix Poly Phase
5
The Electro-Harmonix Poly Phase is a stereo phase shifter and envelope pedal designed for use with electric guitar. It can certainly be used with other instruments, but I believe the original intention was as a pedal for guitar. There is a newer reissued version of the Poly Phase, but this review is for the original. It's an analog pedal consisting of 1/4" connections for input, effect output, and direct output. It isn't rack mountable as it's a foot pedal.

Using the Electro-Harmonix Poly Phase isn't hard, but it definitely takes some time to get the full effect and to learn all in the quirks of the pedal. It definitely isn't hard to understand the parameters and controls involved, but you'll need some time to learn how to get certain sounds out of it since it's so versatile and has so much to offer. The parameters that it has include knobs for feedback, rate, envelope modulation, modulation rate, and the sensitivity of the envelope. There is a really a big difference in sounds if you set the parameters in different ways. I haven't seen a manual for the Poly Phase pedal, so I can't speak to it's make up.

The sounds that are possible with the Electro-Harmonix Poly Phase are outstanding and incredibly fun to play with. You can get some super smooth sounding phasing tones, but the envelope is awesome as well. It's definitely a unique sounding pedal, as there are tones on here that are hard to describe in words and are unlike anything that I've heard before. I don't own this pedal and have only used on sessions where a client brought the pedal in, and I'm sure that there are sounds it has that I've yet to hear. This pedal is highly sought after for a reason, and the main reason in my opinion is for the flexibility and range of tones.

The Electro-Harmonix Poly Phase is a pretty rare pedal to find out there these days, and there is a digital reissue if you can't find one or don't have the money to spend on a vintage one. However, there's nothing like the original as the Poly Phase is really a pedal that's all it's own. It's much more than just your average phasing pedal, as it's capable of so many different tones. If you ever get a chance to check this pedal out, do yourself a favor and do so!
Did you find this review helpful?yesno
»

Other Electro-Harmonix phasers for Guitar