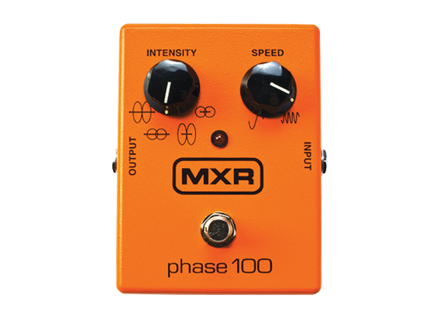 MXR M107 Phase 100
4
Primarily a singer, I've been playing guitar for about 10 years, been in a band (drummer!), and have continued to record and play with other musicians on a non-professional basis. My styles range from folk to hard rock, with heavy power-pop leanings -- Big Star, not Green Day.

I bought this at Truetone Music in Santa Monica, CA for about $120. I needed an '80s-inflected tone for an upbeat rock song.

The phasing effect has a nice, instantly recognizable quality that evokes Eddie Van Halen's tone. Rhythm parts become much thicker and more hi-fi, giving chunky chord work a different dimension than ordinary high-gain crunch. Compared to the classic Phase 90 pedal, the Phase 100 also has an extra Intensity knob in addition to the Speed control, giving you that much more control over the sound.

Not much, really, except that the battery compartment is a big nuisance to get at. Why any manufacturer would still not provide simpler battery access on an effects pedal, I don't know. The Phase 100 requires that you remove four huge screws and the entire metal bottom plate, and the first time I had to put a battery in, I almost sprained my wrist because the screws were in so tight. The plastic appendices you can cap over the control knobs (the grooves on top allow you to turn the knobs with your foot) are a nice touch, but their fit is so tight that once they're on, they're very hard to get off. Finally, the knobs themselves come off the pedal with just a gentle tug. I've had two pedals do this, and I don't believe any good comes of it -- it just means you can lose the knobs or accidentally put them on the wrong way so that the indicators don't reflect the actual setting of the controls. The knobs should stay put with the pedal.

The body of the pedal is heavy and sturdy. I don't like that the knobs can be yanked off very easily, however, and the on/off switch is a bit stiff.

I love the sound of this pedal, but some construction issues (battery access, knobs, knob appendices) could use major improvement. But for what it does for my sound, the Phase 100 is worth you trying to weather some of its irritations.

MXR M107 Phase 100
5
The MXR M107 Phase 100 is a phaser pedal that is designed for use with electric guitar. It was kind of supposed to be the next step up to the MXR Phase 90 with more options, although I'll say right off the bat that I don't think it's best sound is as good as the best sound on the Phase 90, although the 90 is of course simpler. The Phase 100 has 1/4" connections for input and output and can be powered with a 9 volt power supply. It's not rackable since it's a foot pedal.

The configuration of the MXR M107 Phase 100 isn't too difficult to understand. The first parameter is for intensity and the second is speed. Intensity has four waveforms to choose from while the speed has two. That's pretty much all you need to know, which is more than the Phase 90, where all you need to know is speed. If you want to know what each waveform for intensity is exactly, it probably has that information in a manual but I haven't seen it so I'm not sure.

While I do like the overall sound of the MXR M107 Phase 100 and do think it's more versatile than the Phase 90, I still can't say that I like it better overall as a phaser pedal. It seems only logical to compare this to the Phase 90, but setting this aside for a minute, the Phase 100 is a very solid sounding phaser that is capable of getting a wide array of different sounds. It's got 10 stages and makes for a cool collection of sounds between the different waveforms.

The MXR M107 Phase 100 is still being made today, although there is a vintage version with the script writing as well. I've only used this more modern version of the pedal and think it's pretty awesome to have around. I still wouldn't recommend going alone without the Phase 90, but having the Phase 100 and Phase 90 pretty much covers all the bases when it comes to phasing effects. Check out both of em first to be sure which one you want if you can only get one, but these are pretty much the way to go for phasers.

MXR M107 Phase 100
5
Phaser pedal offering 4 types of waveforms and modulation depths. Wholesale: the circles represent the depth of modulation and the horizontal lines the "width" of impacted by the effect itself frequencies. The "speed" button meanwhile sets the speed of the phasing.
Robust housing broader that usually offers MXR format. Powered by 9v battery or mains powered adapter.

Once we understand how each of the 4 positions controlled by the left button works, it is very easy to configure the available effects.

This 100% analog pedal, directly derived from the model originally released in 1977, has a manufacturing not only neat, but more importantly, a drastic manual sorting of some of its components. Thus, each pedal Phase 100 offers the same great as that provided by the original model musicality. Great for the current bid for it is absolutely useless to invest a fortune in a model called "vintage" in the late 70s!
The sound quality is the appointment and at all levels of settings even with the speed set to the fastest. This is a constant feature in MXR that still offers a range of actual usage over the entire stroke permitted by the various settings.
Note that minimal speed, the effect turns a touch of flanger quite successful, particularly in the high frequencies. Overall musicality is very close to that offered both Reissue brand models.

I have four phasing in of MXR and they are all fantastic: musicality and originality are really there. It is, for me, the best phasing available while remaining affordable. The price / quality ratio is therefore at the top level.

Teoh's review (This content has been automatically translated from French)

MXR M107 Phase 100
5
Analog Phaser very effective.
I do not know the history.

Very easy to use with big buttons easy to handle and very responsive.
We chose the form of "wave" and speed, childish.
The pedal runs on battery or AC adapter standart.

Quality is at the appointment, usually in MXR.
It is a very sturdy pedal, which colors the sound perfectly, without distorting either.
Works as well as its clear that in overdrive.
This is a phaser with a capital "P".

Expensive purchased in 2005 (over 200 euros), I was looking to invest in good quality stuff. I'm just finally served, because I need a flanger. Unfortunately, I can not keep, because I have to reinvest in something else, with little means.
This is a great effects pedal.
The price has dropped it seems to me, and this material very good and very solid.

Other MXR phasers for Guitar