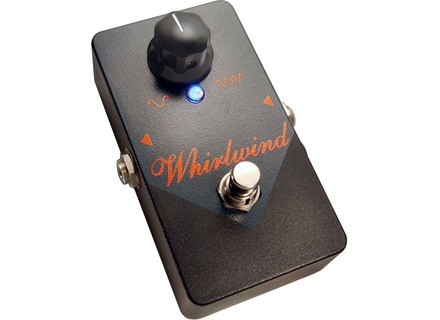 Thierry255's review (This content has been automatically translated from French)" A stage 90 but prettier :)"

Whirlwind Orange Box Phaser
5
Pedal analog phaser effects, rather faithfully reproduce the supposed "original" circuit stage 90, with the addition of an LED and true bypass.
Can be powered via battery or standard Boss-type power supply by 9v.
I had the opportunity, curiosity, open the pedal, and everything is assembled with great care.

Config ultra simple, it is the presence of a Phase 90

Personally I use it first thing in the chain, right after my Whammy 5.
There is a flyer in the box, in which appears the manual of the pedal, but let's face it does not really need a manual to explain how to turn a knob: D
Button which is therefore used to obtain a speed faster or slower phasing.
Note that compared to Phase 90 "standard", the minimum rotational speed is high on the + whirlwind model.
It may seem unsettling initially (at least when we used to use the slowest setting on the MXR), but in the end we are not quite accommodate. I would say after a few months of use that rendering is more musical in the speeds that can be achieved.

The effect is very effective. I use it on electric guitar.
So it seems, this is supposed to be the most faithful reproduction of the original models of stage 90 I do not know if this is really the case or not, I have not heard with my own ears Phase 90 "Vintage"; anyway I can guarantee you that this pedal has a little something in the sound that other pedals do not have phasing.
I previously used a EVH Phase 90 to be able to choose between "Script" and "Logo". I wanted to change a phaser sound Small Stone (not the same output as the Phase 90), can have two different output levels thanks to the switch so therefore present on the EVH model, and I did not want either of the species brought to its saturation phase 90 when "standard" is used with dual microphones.
This EVH model was therefore exactly what I needed. And since I bought the Whirlwind, I no longer use the MXR.
Yet, there is a slight saturation (still lighter than a Phase Model 90 equivalent) when playing on a clean guitar with humbuckers. But there is a difference of musicality with MXR models. Phasing is a little less aggressive, more subtle but very nicely presented. No need to switch level, the record is not too low or too far, very well balanced. If it is not satisfied, it is still within a trimpot for varying the intensity of the effect. No decrease or boost volume when switching, as sometimes happens on other models, and no exaggeration either on bass or treble on.

I was lucky to find this model used, which is rare, so I took the leap without hesitation. I've had about 18 months.
I owned EHX Nano Small Stone Version Us (Big Box) Small Stone V2, EVH Phase 90 and I had the opportunity to test a standard Phase 90. There is little that the Small Stone vintage (which I still have) made me much effect.
There a little something in the "Swwooooshh" this pedal I have not found in other recent pedals.
From time to time, to test, I told myself that I would hand out the MXR or Small Stone in its place. I take it off of my pedalboard, and the next day she is already back

The value for money is excellent. If I lose, I will look for another right away!

Whirlwind Orange Box Phaser
5
This is a phaser, supposed to be a very faithful reproduction of the first circuit stage 90.

Compared to roginal he diode commissioning and it is true bypass.

Nothing more simple, one button for the speed of the effect and go

Found perfectly sound of the first models. The effect is more subtle and less aggressive than the latest versions (including Script Logo).

Outside the original vintage, this is what I found most faithful.

He is not ready to leave my pedalboard!

It seamlessly integrates the sound without causing quirks. I have tried many (MXR Script Logo, Analogman Phase 90 Modified) and it's really the one I liked the most.

The only flaw is its price a little high and difficult to find (I had to call the Whirlwind USA to find a dealer who has in stock).