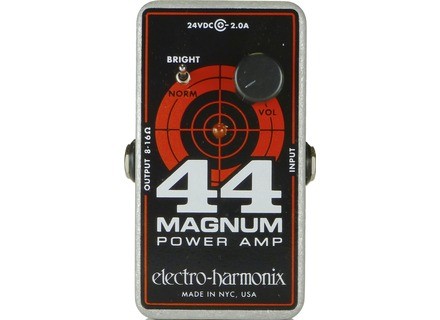 View all offers for Electro-Harmonix 44 Magnum »

racerevlon's review"The back-up that EVERYONE should have in their bag!!"

Electro-Harmonix 44 Magnum
5
Electro-Harmonix has done the guitar equivalent of breaking the sound barrier. The EH 44 Magnum is a 44-watt POWER AMP (yes, that's correct, POWER AMP) that takes up the space of a pedal on your pedal board and can run into an 8-ohm minimum load. The amp (pedal) is extremely simple. There is an input jack for connecting your guitar input signal. There is an output jack for connecting to a speaker enclosure--THIS IS VERY IMPORTANT--DO NOT CONNECT THE OUTPUT TO ANOTHER PEDAL!! USE A SPEAKER CABLE and connect the output to a speaker enclosure. There is a jack for the included power supply (14 vDC @ 2 amps), a "bright/normal" switch, and a volume knob. That's it. Oh, there IS an LED that lets you know when the amp is on. The 44 Magnum can power a 4 x 12 (or two) with relative ease (you'll need a way to split the signal as there's only one output). As you turn up the 44 Magnum not only does it get louder but it starts to break up just as a true tube amp would. It's not the best-sounding overdrive in the world, but honestly, I've heard worse.

To talk about the sound one can get out of this amp is fairly futile. It's a simple solid-state power amp whose entire purpose is to accept the input signal where the guitar tone has already been defined and simply allow it to drive a speaker cabinet. It's extremely simple to operate; one only needs to remember two things--1) hook up all of your guitar and speaker cables BEFORE you connect the power cable and 2) you need a minimum 8-ohm load. beyond that, there's a volume knob... turn it up 'till it's loud enough. There's a "bright" switch... flip it if your sound is too dark. That's about it. Oh, and it obviously won't run on batteries.

I play most of my standard Dimarzio-equipped Neal Moser guitars, Ibanez, and Gibson guitars such as Les Pauls and SGs. I use the 44 Magnum on my back-up pedal board that includes a pedal tuner, MXR Noise Clamp, FB-2 Booster, BOSS Power Stack, MXR Carbon Copy, and all of this runs into the 44 Magnum. I always set this up before I start a gig. If anything goes wrong with my main gear I swap out my guitar cord and my speaker cable and I'm back up and running in about 5-10 seconds.

This is the perfect backup for a gigging guitar player as it will fit on a pedal board or in a gig bag. Electro-Harmonix also makes a 22-watt version of this pedal called the 22 Caliber. The idea of having a power amp in a pedal format is brilliant--if anything happened to mine I'd get another without hesitation. My only gripe with the pedal/amp is that you have to connect the power lead to turn on the amp. A simple on/off switch would make this the perfect pint-sized power amp.

8oris's review (This content has been automatically translated from French)" It sends heavy!"

# What is the power output?
44 Watts.
So watch eh, 44 Watts, ca dépote not bad. With Orange PPC 1x12 cab, apartment, I rarely shoot the volume knob beyond the quarter of the race.

# What are the settings, effects?
Volume control, and a bright switch / normal to add some presence.

The pedal is in metal, quite heavy. Nothing special: it is the EHX. Note that unlike the 22 Caliber from the same manufacturer, the power of the .44 has a grounded outlet, which can avoid some problems if your mains hum is not super clean.

# The configuration is it simple?
Yes, the preamp of choice is industry input, output, and HP is good.
However, be careful not to turn the pedal until you have connected the HP under penalty of damaging it severely.

# Gets it easy to sound good?
Yes. It simply sets the output volume. The bright siwtch / norm will be on bright position for a little more piercing sound.
Note that the pedal does not generate any buzz, hmm sound or other junk.

# The manual is clear and sufficient?
Yes. Everything is well explained in terms of use, diet, precautions connections (see above).

# Will it fit your style of music?
Yes, I am in styles is hairy is calm and clear or distortion with the right preamp upstream and downstream HP good, the sound is there and it is good: fairly neutral and with a very good momentum.

# What kind of sound you get and with what settings ("crystalline", "bold", ....)?
Again, ca depend on the preamp, the EHX is fairly neutral in the end.

# What are the sounds you prefer, you hate?
When I play alone, siwtch is "Normal", by against a group, I tend to switch to the "Bright" so that the sound penetrates the best overall mix.

# What is the particular feature you like best and least?
Plus:
- Ease of use hands
- Sounds fairly neutral
- Big big power reserve
- Switch the norm / bright
- The small size
- Grounded outlet to say goodbye to hum.

The least:
- Power supply "block" which is heavy and bulky

# Have you tried many other models before buying it?
I had a Tech21 PE60 power amp which was slightly more neutral.

# How would you rate the quality / price?
Good.
It was a bit expensive at the time (about 150 € in nine), but opportunity and around € 100, it starts to get interesting.

# With experience, you do again this choice? ...
No, because the power reserve is really too big to play at home (I'm in an apartment). I would have taken a tube cake in AMT. But the .44 is nevertheless an excellent power amplifier.

Electro-Harmonix 44 Magnum
4
Everything has been said

both transparent below 25W (at noon knob so) and "organic" above (although I've only tested once, not long because the machine can quickly break the leaves, even titanium ... Big Power)
This is a contraption in any case extremely musical, whose watts are "big" W ...
However, a major flaw: it is as loud as a heating lada niva in the steppes of the Urals in January ... Besides, if some have found a way to reduce the breath (change of power supply, for example?) Let me know your feedback!

essential in a mobile rig ... the latter is full analog or digital sounds very well.
Only remains for me to address this breath for the five stars ...

Mega Config simple!
Manual useless, There's only two buttons!
Its clear until 12pm, after that crunch, but no worries, I'll come back ...

I use it with my rack (JMP1, TC electronics, BBE maximizer), or with my RP1000 when I make my lazy, I finally found the "amp" that does not alter my sound, no need to lug around my head Blackstar or my ENGL, thank you for my little mimine!
This is the best laptop I was looking for compromise over the years it is compact, robust and powerful like a cover scratches!
Ideal in any home or live situations repeat a condition of having a baffle, 0)
If I want the fart I spell my amps, but it's fun to fight with a JVM or a mesa with a foot to less than 150 Euros ...
It took me around 10 because for the price and services that make me I say PERFECT!

Did you find this review helpful?yesno
»
Read the 5 user reviews on the Electro-Harmonix 44 Magnum »

See all 142 photos of Electro-Harmonix 44 Magnum »

Electro-Harmonix 44 Magnum manuals and other files