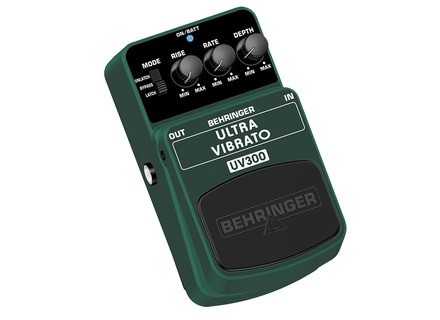 Behringer Ultra Vibrato UV300
3
A "rate", a "depth", a "rise" I guess it defines the effect of the attack but I leaned over 2 seconds, 3 + a switch modes, Unlatch-Bypass-latch in Wholesale latch vibrato does starts when you press the pedal, if you loose it no longer acts, while the Unlatch is the classic "is pressed it triggers is pressed again it stops" . Unless it is otherwise, it UNLATCH latch and vice versa. Bypass I do not know. I do not use only the "usual".
I have not tried to put a battery, a 9V power supply is enough for me. Note that I have seen nowhere trap, then he must open the box, be careful, it's plastic.

Sound quality: Good, okay, vibrato is not bad. I read that part QLQ approached the BOSS that has been made only 2 ½ months (I exaggerate) as I cracked the piggy bank (35 euros, anyway).
I was looking for (sorry, I'm looking for) a slight vibrato, used on acoustic or electric, almost minimum effect, like a veil, velvet ... See ... So exit the Electro Harmonix psychedelic (for example).
The Behringer known about doing that with two defects:
- The least is that the speed range ("rate") from a minimum that is my taste too fast. It would be so difficult to start from scratch?
- Failure to lower the pedal is not invisible when not in use. Not "true bypass", whatever. It colors the sound, something like QLQ the medium and more, in short, a real failure, whatever. More noticeable on (Model Dupont St. Louis, Gibson ES-type 125) as folk (Dupont always).

That said, I still use it, at least with the folk, it "should", pending better. It is plastic, it is "cheap", but she spends her life with other metal pedals, and little is trimballée formed - and for now she is in shock.
lack of thrush ...
Obviously, when you see the price, we say we will not ask for the moon. Luckily, Behringer, it was not in stock ...