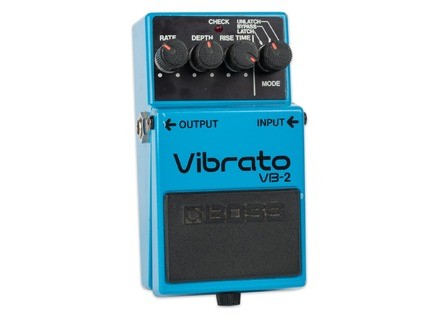 Boss VB-2 Vibrato
5
This is a vibrato pedal, one of the more interesting ones out there, surprisingly. This is a straight analog pedal designed for use with electric guitar, though supposedly it can be used with other instruments as well. It only has the standard 1/4" ins and outs. It's not rackable and is not MIDI compatible.

The effects editing on this pedal isn't too crazy, as it only has a handful of controls. There are knobs for depth, rate, rise time, and a mode knob.The latter knob switches the pedal between three different basic configurations, which are named unlatch, bypass, and latch. It's difficult to describe in words the differences between each of those modes, and since I don't have a control manual I can't get too technical about it either. Basically, experimenting with the sound is the best way to figure it out, and it won't take long. The depth of controls actually makes this a pretty versatile pedal for a relatively underused effect.

This is the only vibrato pedal I've played that actually produces vibrato and not tremolo (everybody seems to confuse those terms to no end). The sound is pretty interesting, as it gives each note and chord played a drastic (or not so drastic) pitch bending. The range of the pedal's effect is rather refreshing too, as it doesn't affect the signal too strongly unless set to do so. It can be refreshingly subtle for softer leads, like those on Wilco's Sky Blue Sky album (I checked this pedal out after learning that Wilco's Nels Cline uses this pedal quite a bit). And it can also give wilder solos a warped, surreal edge that is quite compelling. It's not a pedal for everyone, in fact, the effect isn't heard much anymore, but I think the range of sounds that this pedal is capable of producing is quite nice. One note, however, is that this pedal tends to only sound as good as the person playing it. An inexperienced player isn't going to sound that great on this unless he knows how to use the effect well.

I like the range of effects that this pedal is capable of producing. I also think that the sound quality is very good and that it is remarkably clear and not distracting. I know that it's hard to find nowadays, but I'm sure that any experienced player of blues/rock and other similar styles will find some use for this. Jam band aficionados would do well to find one of these.
Did you find this review helpful?yesno
»

Boss VB-2 Vibrato
5
The Boss VB-2 is a vibrato pedal designed for use with electric guitar but can be used with any electronic instrument, although I've only used it for electric guitar.  The pedal has 1/4 inch connections for input and output and isn't rack mountable as it is a foot pedal.

The make up of the Boss VB-2 Vibrato pedal is easy to follow as it only has a handful of parameters that need to be dealt with.  The pedal has parameters for depth, rate, rise time, and a mode knob that has options for unlatch, bypass, and latch.  It isn't hard to understand the pedal's parameters and after playing around with it for a few minutes I was able to fully understand all of the parameters involved with the pedal.  A manual isn't needed for the Boss VB-2 Vibrato so I can't say if it would be helpful or not.

The sound of the Boss VB-2 Vibrato is pretty awesome overall.  It has pretty much all true vibrato sounds, rather than tremolo sounds as the two are often confused.  I use the pedal with a Fender Strat and a '76 Fender Twin Reverb for recording and I'm able to get some really great vibrato tones within this set up.  The parameters allow for the user to get all sorts of vibrato sounds, ranging from subtle to insane a la 'Honey Pie.'  The tones are rich sounding and are great for a variety of genres and applications as long as you get creative with it!

Overall, the Boss VB-2 Vibrato is one of the better vibrato pedals out there.  It sounds great and is quite easy to use, as is the case with most Boss pedals.  Since this is no longer made, it is a bit more sought after than most pedals and will cost a bit more than normal Boss pedals, but if you are looking for a true vibrato pedal, I believe that this is the only one that Boss makes.  If you are looking for a vintage vibrato pedal or just any vibrato in general, the Boss VB-2 Vibrato is a great overall choice.

goldmaxpower's review (This content has been automatically translated from French)

Boss VB-2 Vibrato
4
it's a boss pedal reproduces the years 80.elle a so-called "vibrato". nothing to do with the tremolo, which acts on the volume, it acts on the VB2 pitch of the note as when you made a vibrato with your left hand vibrato or a guitare.trois adjustment (rate, depth and rise time) and three modes (unlath, bypass and latch).

good is super simple but it takes time to settle as much as it can be very pretty, as it can give naussée !!!!!

Depending on the settings, you can have a really beau.sur you tube for example, samples are horrible because the guy really accentuates the setting for Me to hear them .... I manage to make a kind of e-bow with my pedal!

good then it's on, the effect is a bit bizarre.je think his interest is mainly in its rarity and its value for collectors.