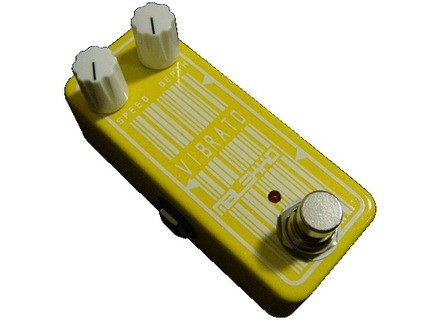 Omicron Vibrato, Tremolo/Vibrato for Guitar from Malekko in the Omicron series.

Malekko Omicron Vibrato
5
The Malekko Heavy Industry Vibrato is a mini pedal for electric guitar. I believe it's an analog pedal but I'm not 100% sure on this. The pedal has 1/4" inputs and outputs and can be powered by either a 9 or 12 volt battery. Malekko recommend using the 12 volt battery for a fuller sound. The pedal has true bypass also and isn't rackable since it's a foot pedal.

The make up of the Malekko Heavy Industry Vibrato pedal couldn't be easier. It only has two knobs to control depth and speed. That's all there is to it, which isn't too surprising for a vibrato pedal because that's pretty much all you need and are the same parameters you'll find on most amps that have vibrato. No manual should be necessary here.

The Malekko Heavy Industry Vibrato has a great overall sound that's very full and true to the great vibrato pedals and sounds found on amps. I've only used the pedal for electric guitar, but I would bet it would be cool for some keys as well. I don't own this because I have vibrato on my amplifier and don't really see a need, but one of the studios that I work from has it and it's awesome to use in the studio when you're looking to use some vibrato with a non-Fender amp. Definitely up there with some of the best I've heard in a pedal.

The Malekko Heavy Industry Vibrato is a great pedal if you're looking for a top notch vibrato pedal and also like the convenience of saving some space on your pedal board. If you have some vibrato on your amp that is pretty decent you probably don't need this because it's not going to give you more varying sounds than that will be able to. It's price is a bit above the average but it's definitely an about average pedal.