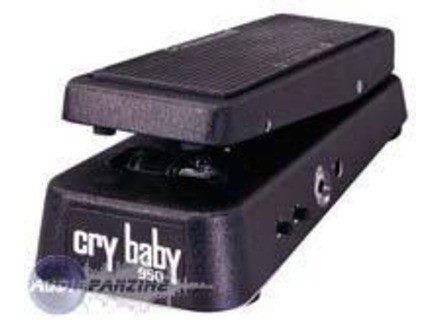 Large number of controls. Volume boost button. And it's a classic wah.

The on-off toe switch is very, very hard to use. Why is there no easily visible "on/off" light indicator? I have to do a St. Vitus' dance just to figure out if my wah is on. The control settings also don't seem to make a whole lot of sense. They are also very hard to operate as you're using the wah, since they're on the side. Wish they could have made those controls foot-switchable somehow.

Good, but the on/off button is not very responsive. I also don't think the expression pedal takes kindly to transportation, and the box that comes with the pedal doesn't give *any* protection. (Dunlop is being cheap in this department -- Electro-Harmonix, for example, gives a wooden box for its Big Muff.) So diligence is required when you're shipping this pedal.

I rarely use this pedal. That's more because I'm not much of a wah person, and the sounds I get from the 95Q are good. However, I also think that if the designs were better (the on/off switch, especially), I would be much more inclined to learn how to use it, just as I figured out Floyd Rose trems, delay pedals, Steinbergers, and my Korg D12 digital multitracker.

Dunlop 95Q CryBaby Wah Wah
5
I purchased it through musician's friend.com for $109.95, I had been to the local guitar shop a few weeks earlier and tested it out there, but they charged WAY too much for it. I found it for alot cheaper, so I bought it.-Simple eh?

What I really enjoyed was that you can get alot out of this pedal. You can get the cliche porno music "Chikachika-wahwah-chika-wahwah", or by adjusting the "Variable Q" knob on the left side, you can alot more low end, and by turning it up, you can get more of a high end. Once distorted, this thing is a MONSTER. On the back righthand sire there is a little red button thats a 15db Gain Boost, Right when you want or need to be louder than everyone else, you can. I love the way it sounds, you don't even have to do anything. I swear, you can just hold your strings, not letting them vibrate, and push it all the way forward...*ta-dah*,Instant feedback. What was even cooler was by playing a note, and holding it for more than a few seconds, you can get feedback in different keys and notes (great for ending a song). Its really nice. Just imagine, the love child of Morley and VOX. Thats the best way I can describe it. This thing does whatever you want it to do, no questions asked, just set it to your liking, and play.

I've looked,listened, and played over and over, and I've yet to find any flaws.

Brand new. very solid and heavy die cast construction, which makes for many years of good use.

This is one of the most important parts of my arsenal. The only things more important are my guitars, and amps! It does what you want it to do. Its reliable, the wires aren't cheaply made, the battery compartment's jack is not some cheap little rubber dealy hanging on by 2 thread-like wires, its a solid piece of plastic with nice, thick wires. This thing won't die on you. It lasts, and is ideal for anyone who uses a wah.


The sound and the range is magnific.
In all the positions you have very diferent sounds.
At top you have added harmonics and nassal sound and in the bottom metallic sound.
great for use whit overdrive and chorus.
the vol. difference between dry and bypassed signal is good.

The high frequencies are so high and very metallic but its ok.Eats a lot of battery.To change battery you have to remove the 4 screws.

Rock!!
Black Steel gives strenght and years of use and abuse!!!!

It's a classic. It's sturdy, has that famous Crybaby sound. It's reliable and I know it will be around for a while.

There's not much to not like. The only thing I hear about these units is that the switch or internal guts will sometimes wear out with use, but Dunlop stocks all the parts so you can replace them yourself.

Built like a tank but susceptible to wear, especially if you gig frequently and or abuse the pedal.

This is classic performer with great tone, an unmistakable sound and solidly built. Everyone should have a Crybaby in their rig.

This review was originally published on http://www.musicgearreview.com
Did you find this review helpful?yesno
»
Read the 11 user reviews on the Dunlop 95Q CryBaby Wah Wah »