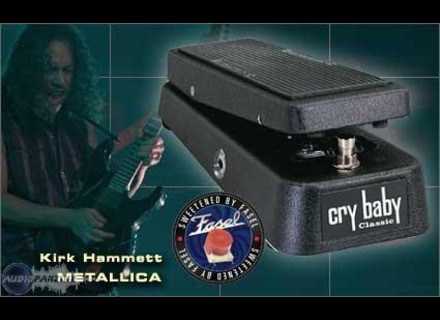 Dunlop GCB95F Cry Baby Classic
5
I bought this wah wah pedal at shop here in Gander, Newfoundland, Canada and I liked it a lot the effect of the fasel inductor is amazing. I paid $250 Canadian.

I love the wah anyway but this one is special. It has a fasel inductor with it that makes such a cool sound. This pedal is also used by Metallica's lead guitarist Kirk Hammet.

Its a bit to exspensive but otherwise I can't think of anything else bad about it.

The quality of this unit is very good. It gives you a nice wah sound. I love it.

I think everybody should buy or at least loook at one of these there awesome!


This is pretty much, like all wah pedals, solid in terms of construction. But this one sounds especially killer thanks to the fasel inductor. Apparently one of it not the original inductors used in the crybaby's beginning stages of production in the 60s that made it sound oh so sweet. Not true bypass, most dunlop wahs are not.

Quite easy, just like every other wah, you click it on with your foot and rock'er back and forth to sweep through the sounds.

I haven't owned this pedal for a long time but have recently reviewed a few wahs and distinctly remember the classic sounding very very good. Why? It's probably the inductor that gives it the sound that it has. Again I can't tell you what it sounds like without comparing it to something as a reference, that seems to be what guitar players do almost all the time, it's gotta be a/b'ed. The classic screams! It's almost as if it's got more gain or adds some sort of boost to your guitar signal (on distortion of course) and it's got this killer top end that is JUST a level below being too shrill but cuts through like a knife. The background noise is also increased in the classic, which I actually like. It's got a sort of familiar feel to it when the background noise is there. To me, wahs are meant to add noise so you can go on and do crazy stuff, the less noise the less crazy sounds you can pull out in my opinion.

There just seems to be more presence and it's as if, for example if there was a mix knob of how much of the wah effect you want put into your guitar signal, compared to the regular crybaby, the mix on the classic would be at 100% while the mix for a regular GCB-95 would be maybe 60% or so. Just when you sweep it, the actual WAH sound is so big and present! Love it!

Overall great wah. I like the classic it's very effective and seems to be a lot bigger sounding with more sizzle and presence. It just seems to be more of a wah than the original crybaby. If you've got the extra dough to spend it's definitely worth looking into. I'm not saying that the original isn't good but just that the classic is better if you have the option. I like'em both for what they are, but if I had a choice, the classic would get my attention.

Dunlop GCB95F Cry Baby Classic
3
The Dunlop GCB95F Crybaby Classic is basically the industry standard when it comes to a typical "wah pedal" design. Dunlop has been making Crybaby wahs for many years and this GCB95F is just the modern day version. It's housed in a typical metal casing, fairly durable. There is a 9V output for an adapter or one can put a battery inside as well. Unlike some of the more modern wahs that exist which contain fasel adjustment or controls to adjust volume or tone, the Crybaby Classic only has a metal switch to turn the pedal on. It's pretty simple and easy to use overall and makes for some cool tones.

Setting up this pedal requires nearly nothing. As there are no controls to deal with other than its on/off switch, it's really quite easy to get tones happening out of the Crybaby Classic. The range of the pedal is pretty good and goes from a very thick and bassy tone, through the classic Michael Schenker "cocked wah" tone to a very bright and biting tone that's almost like the amp was hit with a treble booster of some sort. The only thing that can confuse some new users is where to plug your guitar cables in. The labeling for instrument and amplification jacks isn't the easiest to see on the Crybabies and it can cause confusion when no sound emits from the pedal...

The sound quality of this pedal is decent enough for someone who just wants a generic wah tone. It can sound a bit harsh when depressed fully and gets a bit wooly/muffled sounding when it's all the way up. There are basic electronic mods that people can do to this pedal to make the sweep a little bit less drastic, and I've tried those as well with decent results. Also, I found the GCB95F to be a rather noisy unit when compared to some higher end wahs. This isn't a big deal if you're just a beginning player or a casual wah user, but if you want something for a pro rig, this isn't one I'd look at.

All in all I think the Dunlop GCB95F is a decent wah for the hobby player or someone who just wants a wah for occasional use. It's priced pretty well and they're also quite durable. The tones are passable as stock, but not something I would gravitate towards myself due to the harsher nature of the tone and the additional noise I found. If you want a barebones wah for not a lot of cash, give the Dunlop GCB95F a look and get cryin'!

heads on fire's review"There are better wahs than this."

Dunlop GCB95F Cry Baby Classic
3
This is your regular ol' super simple Crybaby wah, only this one has a Fasel inductor. The Fasel is supposed to give the wah a more vintage tone, reminiscent of Cream or Hendrix, akin to the tones used in the old Italian wah pedals. There is a rocker pedal, a stomp switch underneath that, 4 rubber feet, and a battery door. The battery door is quite convenient compared to older Crybaby wahs, where the rubber feet had to be removed. 1/4" in, 1/4" out.

I gave this area a 6 because the rocker/switch/rubber stopper combo is rife with maintenance and malfunction issues, in my experience.

This is a very easy pedal to set up and use, about as easy as it comes, provided the inductor is greased properly, and the rubber stoppers are in good shape. Otherwise, it's a nightmare. The maintenance issues are relatively easy to fix, but hard to source parts for, and it seems like this pedal has issues too regularly to be worth the hassle. I've also had one of these pedals completely stop working on me, with no user abuse, so this wah unit is not durable at all.

For all of its problems, this pedal sounds very good. I've heard better wahs, but not for the money. But, for just a few dollars more, a used Morley Bad Horsie can be found, with a much more reliable (in my opinion and experience) optical switching system, and still have good tones.

This pedal would work in a pinch, and for people that rarely gig, it might do alright. It certainly sounds very good. But for me, as a working musician, this pedal is just an utter liability. If I needed to get a wah and was looking around, I'd get a Morley for a few bucks more, or if the budget is there, a nice Gig Fx wah.
Did you find this review helpful?yesno
»
Read the 10 user reviews on the Dunlop GCB95F Cry Baby Classic »