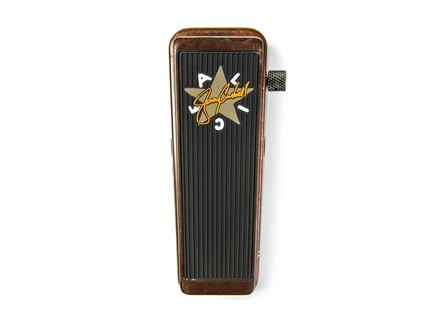 Dunlop JC95 Jerry Cantrell Wah
5
Jerry Cantrell is one of the most iconic guitar players of the 90s. When metal was dead and grunge was taking over Cantrell kept good guitar playing alive with his furious riffs and bluesy solos he produced on the many Alice in Chains records.. In many of his solos he used a wah pedal. Now Dunlop has put out a wah pedal capturing Cantrells unique dark wah tone. The wah pedal has been a staple in pedal boards since the 60s because it is a great way to make your tone stand out. What makes the wah effect so dynamic is that it emulates the frequency filtering that occurs in the human voice. The name of the effect itself is taken from the filter sweep that happens in your throat when you say the word “wah.” Wah pedals with a narrow band only produce frequencies that are very close to the center of the frequency you specify by the position of the pedal. A narrow band will produce a very sharp, focused, and drastic wah effect. Wah pedals with a wider, more relaxed band deliver a calmer, more subtle wah effect. The Cantrell wah has a narrow filter so the wah effect is really in your face.

The Cantrell functions like any modern wah pedal. It has the pedal that you step on to sweep the frequencies and it has a knob on the side to adjust the frequency peak. One thing that drew me to this wah pedal was its unique looks. It has a distressed chrome finish and has a star on the face of it with Cantrells signature in it and the letters spelling out Alice around it. Dunlop Wah pedals all have a really sturdy design. They are heavily built. Even with this all wah pedals wear out at some point just because of the way they are used.

This pedal is voiced to replicate the darker wah tone Cantrell uses on the Alice in Chains records. The Cantrell wash has a very wide freqency range that it can sweep across. It can go from way down at 350 Hz which will give your leads and nice heavy bass body sound. The knob allows you to adjust what range the wah sweeps though. With the knob cranked you can go from around 2000 Hz to 1000 Hz. This knob allows it to have a much wider range of voicing than a normal wah pedal. Plugging into any amp with modern sounding gain you instantly recognize the tone of the pedal as exactly like the tone on the Alice in Chains albums.

If you are inspired by the Cantrells leads on the Alice in Chains albums or just want a more versatile wah this wah if for you. With its darker voicing it fits in well with modern music and has more adjustability than your standard wah pedal. On top of all that it looks cool too.

Samuel 62150's review (This content has been automatically translated from French)

Dunlop JC95 Jerry Cantrell Wah
5
Wha effect with a knob (frequency I think). Beautiful copper color, words of Black Frost Way To Blue Alice In Chains (listenable on the album of the same name) below.

One branch is activated, you hack the knob located on the right side (about 12 for me) and it explodes!

So here is what really makes the difference. If you are not looking for his Wha garish but well-defined medium and this pedal is for you. The knob is really effective to shape at will curve effect.

I used for a while, always with the same pleasure.
The only problem I had was a fault (ground?) When plugged into my "dc brick". Once battery powered (9V to place in the compartment just below) the problem was solved.
It may seem expensive but frankly it was worth the money.

Wha pedal just perfect both aesthetically sound level (pedal copper on a pedalboard it does!)

azathothnotsuki's review (This content has been automatically translated from French)" Good wah!"

it's not complicated it sounds, and just turn the knob to find the frequency that works for us. I personally have never turned the knob a background. very robust.

Ben is a wah. I like to try and change them regularly.
I have always been very happy with the sound of the wah Dunlop.
that is not my favorite (Zakk Wylde was in the top, the cantrell is a little darker, more serious in frequency), it is not the worst either ...

it's been 2 years, and it starts to make change ... I like wah I hear, and suddenly I started saturated some of its sound, but I really liked the beginning. just now.
if we were there 2 years so I do it again this choice, not today. but I'll stick with Dunlop (probably the slash or the re Wylde signature or other future who knows ...), because the value for money is more than adequate even though they tend to binge a bit with the series signatures, but it sounds really good anyway ...
Did you find this review helpful?yesno
»

Oliver Sp@rk's review (This content has been automatically translated from French)" Wah ... wouaaaah!"

super simple .. no need for manual!

not practical to fix a pedalboard on the other hand.

I had some problems with noise when plugged in yet with a Pedalpower VoodooLab 2! ... no noise when powered by battery or Sanyo eneloop.

Did you find this review helpful?yesno
»
Read the 5 user reviews on the Dunlop JC95 Jerry Cantrell Wah »