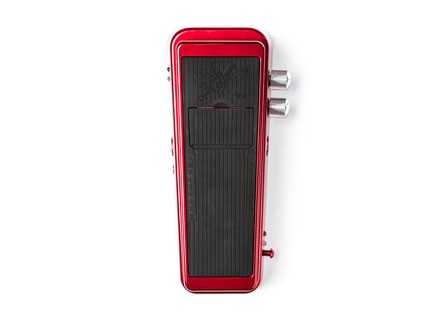 Dunlop SW95 Slash Signature Wah
4
Slash has almost always used a wah pedal, and I'm surprised it took him this long to get one. Along with Kirk, he's one of the more iconic guitarists of this era to use a wah pedal. This one is super versatile, too. In fact, I think it's the most versatile out of all the wah pedals that Dunlop offers at the moment, rack wahs excluded. Not only does this have a wah feature, but there's actually a built-in distortion to go along with it.

These pedals are built like tanks. They can withstand nearly anything you throw at them, short of spilling your beer all over them. The casing is extremely durable, and you can chuck it across the room without much of an issue. About the only thing that occurs is dust and grime getting inside the pot, but you can just spray some contact cleaner in there to fix them, most of the time. The wah is extremely easy to setup, and everything is laid out in an easy to understand matter. This has a few knobs on it, so there might be a quick learning curve, but it's nothing bad. Just turn the knobs until you get the sound you want. The manual explains everything in clear detail, anyway.

The most unique feature about this is that the distortion circuit. Given that I'm a heavy metal player, I generally shy away from things like this. This distortion circuit is extremely aggressive, after all. However, it actually added some sweetness to my overall sound when I set the pots pretty low and let most of the wah take over. When I tried it with a Marshall set to mostly clean, it sent it into a world of chaos that sounded pretty awesome. It can get a bit buzzy, so be sure not to max it out.

I think this is the first Dunlop wah with a built-in distortion circuit. It's not that bad of a sound, and it's extremely versatile. For those that are playing high gain amps, you might want to lower the gain real low on the wah simply because it's so powerful. Those playing with clean or slightly dirty amps will most likely love the extra boost and oomph it gives to your overall sound. The worst part is that this thing requires either a special adaptor or two 9v batteries.

iper have confi single apui and op ps: not too much volume meter on there if not distortion oula

for m'à yes, I played on standard sg anscienne verssion. Are little diférais an amp to another I have a vt 40 plus that has very good amp simulation and route there diference between the amplifier

I use it for almost 3 years I try Morleys t rex ....... etc. morlez not only for assertions distos polivalente
I was in the store, I entandu there and I ask what it was, and m'à said it was the slash I try for 1 happiness and voila I buy without ésiter
I love all of cete pedal, the race there fasel
I would do is choice without ésiter
Did you find this review helpful?yesno
»

Setup is simple, I use it at home in my studio.

Wha wha must be placed between your guitar and amp head and not the beginning of the chain effects loop if you have a compressor pedal, the sound will saturate during operation. So you get a max cable to move on stage or in studio.

You have a little button to put a distortion effect, I use it because I have my head afd.

Upon activation, two blue LEDs on the left and one on the right is another light.

My connection is as follows:

5 - Out isp to head marshall afd

8 - Out isp to out of the effects loop

9 - Return of the loop effect to effect in your head.


Operation is easy for you to see which sound you want.

In my case the sound is generally quite dark.

I do not like the distortion knob on the side.

General opinion means I'm not fully convinced by this pedal, anyway I'm not a fan of wha wha but it is pretty on the intro.

The look is nice for cons, I have to try the new slash.

Suffice to say that this is for fans of Slash, the kind of person who blindly buy anything because it's master "SLASH" as his latest album is shit (Apocalyptic Love) is as archi pourrave Moreover, new way, the sound is loud, the Q is too strong, it is sharp and dark, not very musical ... it looks like a Hendrix wah "more" disguised in red with optional drive crappy far from the reality of the JCM800 used by the master, the sole purpose is to dégueulassée sound mode bouillabaisse, to make Grunge is the they would have had the top called Kurt Cobain wah, boost the drive I've ever heard a story like Slash in his boost is a clean boost ... otherwise in Wah EVH signature it is the one that is killing, Wylde and Kirk Hammett that stand out I have not yet tested the Bonamassa (it will not be long) and Dimebag ... anyway Slash uses the Dunlop cry baby rack and used this pedal in front as a controller, yes advertising requires, Dunlop has not given an injection of the presets in the controller as the wah Kirk maybe we would have been entitled to something more successful than the dung, so between that, the amp Marshall VM, celestion V30 clone reissue of Gibson Appetite Derrig Chris Gibson (the original copy copy), Duncan Slash Signature APH2, the master calbute soon in stores in limited edition at Sun, the more you wear it the better you will enjoy with your guitar ... stain warranty

That is to say I'm a fan of Slash ... I have all the CDs, DVDs, seen at the Bataclan concert solo or with Velvet Revolver and I'll brief review October 20 ... So suddenly I was offered this pedal, there is still the big mouth foutage series Dunlop on this one ... but not in December ... € 166, Slash is the core business objectives ... let réaliste.et it must be more than 8 months since I see this pedal on occasion Pigalle ... and no one rebuke in the street so it stinks now am using it when my wife sucks, at least it gives me an instrument of torture at home ... and the kids shout "stop it is our duty" at least I know when they bossent, thank you Slash

12 of 16 people found this review helpful

Did you find this review helpful?yesno
»
Read the 10 user reviews on the Dunlop SW95 Slash Signature Wah »