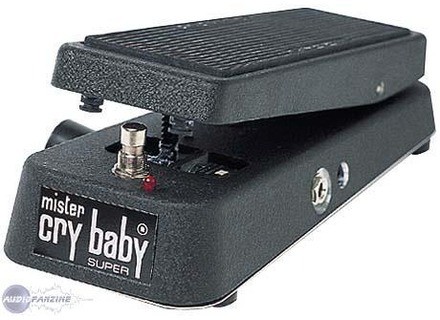 metal's review (This content has been automatically translated from French)

The connection is simple: it enters with the scratches on one side, it shows the amp on the other. For output tuner or other gadget like that.

A small LED on the front pedal, next to the switch for switching on the wah wah indicates that the function is active.

In addition, this pedal has a switchable boost volume at the base by a small red switch on the right side of the wah. This boost is adjustable via the knob on the right and also can reach 16dB. Potentiometer boost is surrounded by a rubber to adjust the boost. Awfully good to stand out from the rest during the solos!

Power level, that is by 9 volt battery or external power 9V/20mA, well recommended. To access the battery, must remove the bottom of the waw via 4 screws is a bit long, but it really does not want to leave it plugged in at once

Namely it is a pedal force, like all wah, with a high impedance potentiometer (100kOhm), then use only upstream of the preamp and not in an effects loop.

Otherwise in building nothing wrong, it's Jim Dunlop pedal metal casing and super strong, the effect on the pot rack is transmitted by plastic, but it looks to me as solid (which has already Dunlop farted a rack?)

That says it all!

Simple and effective when the wah is activated, the pedal acts as a volume pedal. Compared to a classic wah just remember to keep the pedal to the bottom when the wah is triggered, if we lower the volume. How to take a shot.

What else? Control of boost at the foot is easy too, as long as the wah being pasted to another pedal on the right, in this case forget.

Tested between my and my ESP Eclipse Hugh and Kettner Attax 100W (hybrid), it's great fun. It was a classic wah after all (I'm not a pro) and a volume pedal! I speak no further forward, I did not test to see if the food pedal sound, color or other inconvenience of the genre. In any case I have not noticed at first, but I have not done extensive testing.

I have not kept this pedal a long time, for the simple reason that I need a volume pedal to put in the effects loop. This is obviously not suitable, because its high impedance leads the signal returned to the power amp is boosted to almost double the volume and partly because the wah in the loop is not good In any case I find the sound completely rotten.

If I think before you buy.
So I claim illico (see my ads!)

That said, if I needed a preamp pedal before it would have been great, I could replace my current wah (395q), but what's better wahwah level.

JessB's review (This content has been automatically translated from French)

Dunlop EW95V Mr Cry Baby Super Volume Wah
5
Volume pedal / wah. By default the pedal acts as a volume pedal when fully supports a small red LED lights up and it goes into Wah.<br>The pedal also has a small button of boost with a knob to adjust the level on the side, only available in volume mode to increase the volume.

The boost can be accessed at the foot provided you do not have another side pedal and aim well, personally I do not use it, I find it a little gadget ...<br>The pedal travel is a little short for my taste, it must go smoothly, but you get used, it is especially troublesome in volume mode.<br>To switch from wah to volume mode, press the pedal to the metal, so we can not pass such a reduced volume to wah, said this is difficult to do anything with this type of pedal!<br>

I use a JCM800 (no effects loop), and the sound is really great in the intermediate positions of the Wah is also like that I use most often Wah, positioning me halfway, but it does well wah when you want

<br>In terms of volume, I found the pedal quite transparent and it does not generate a breath, for the cons race is difficult to manage.

I chose this pedal because I use very little volume pedal and I do not want to clutter my pedalboard. I do not regret my purchase because Wah really a sound I like (vintage style). For those who use a lot of volume pedal, is probably best to use a pedal push ...