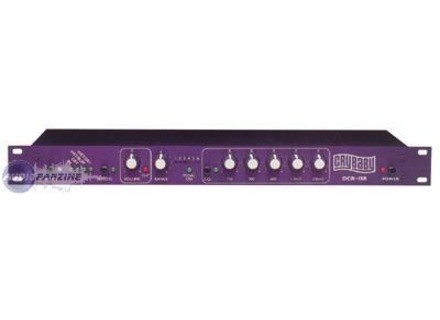 Corto Axeman's review (This content has been automatically translated from French)

Dunlop DCR1SR CryvBaby Rack (Custom Shop)
5
System developed by Dunlop (those who make the Wha, no tennis balls) to generate the effect Wha in a 1U 19 "rather than a pedal at your foot.

Interest: If you already have other racks, the wiring does not leave the flight, so no more cables running to the stage between the pedal and the flight, with extra signal loss and interference chopées all.

A pedal comes with specific, it has the same head that Wha Dunlop, except that it only serves to control the drive signal into the machine. The cable that connects them does not carry this signal, no sound.

You can connect up to 6 pedals (that's the day you will Bercy or the Long Beach Arena in LA), and are also present at a jack in the back and 3 out jacks (one dry out, a dry / wet with a standard buffer). In short, if you are followers of the three signal channels (Left / Centre dry / Law), it's all good.

On the front, you can turn a 5 band eq to change the output signal.

Finally, the icing on the cake, you can choose from six settings Wha, which correspond to six types of Wha on the market, each acting on a different frequency range (the Wha pedal is a standard, up to 6 which contains the settings for a bass Wha)

The English manual is simple, the connections are Jack 6.35 standard, so if you know what is a Wha and Eq, you should not have worried.

To start the effect Wha, you press the shutter on the pedal, same to stop ... So no change in a Wha pedal.

No surpise .. Wha was the sound .. or rather better: it was full of sounds Wha .. between 6 and Eq Wha available to you to find your happiness ...
The Eq fact, works well, its effect is very audible.
As for the output Out / Buffer, again it works well, and the unit is very transparent when the effect is bypassed.

With this system, I said bye to the usual shit pedals (which crachouille the jack, but which one?, Signal loss on 9 m of cable at the other end of the stage, the battery that makes the soul solo by Kirk Hammett, ...).
And I could really find the sound that suited me best at the end Wha (you will see by trying it you can really increase the effect on the beaches of requency necessary).

What I find damage:
- The input signal is mono, as Zakk Wylde and if you want to wha after the preamp and you are in stereo, it's more complicated ...
- The best of the best was to have recordable presets with midi ... reminder for example, an adjustment for clear sound to "Papa Was a Rolling Stone", one for solos (like "Enter Sandman" by our beloved Kirk), and a third for "Voodoo Chile" by Stevie Ray .. .

But hey, what is requested, it does and does it well!

Dunlop DCR1SR CryvBaby Rack (Custom Shop)
5
This is a one rack unit that delivers six different sounds of wah with a five band equalizer (see later), in stereo if desired. It is possible to create a sound in three voices (gache and right with no effect and central).
It is possible to have only one sound at the same time there is no steering twelve o&#39;clock that would order several wah sounds in a row.
The connectors are very good, and there is a "true bypass", and therefore no signal degradation when you enclenhez effect.
The wah is controlled via a foot pedal that does not carry the sound signal, but just check the change in effect (pédalle is specific to this model and is the single most expensive option; count of 150 euros occasion at least) . We can connect six, which allows to use the wah in different places of great scene (it is more difficult to play on a large stage that has this wah ...).

Use of this rack is very simple and you understand immediately how to walk, once it has connected correctly (which can be simply following the chaining that was). There are a series of LED that indicates the connections that are activated and the switch that lets you choose between six main sounds available, a button on / off to activate the equalizer, and the five knobs of the equalizer, and finally the Power button.
The manual is on the Dunlop site, where a page is devoted to explaining the operation of the rack in the FAQ&#39;s. It is enough to know what there is to know before using it (this is a wah wah, not an Eventide H 8000, it does so only two or three pages, nor ).

Whatever the frequency range that we choose to find the desired sound, it is always of excellent quality. We will, in increasing order numbers, high frequencies to low frequencies, to achieve this, the last two settings, with specific wah sounds for bass (that&#39;s how John Petrucci manages for example, Caught in a Wab, at the end of the solo, to get an absolutely monstrous C # 5).
Unless you want to experiment, there is a balance not to exceed the bass boost, because the more you boost the bass while you play the high notes (like a guitar), the effect loses of its power and it becomes difficult to take something out of the instrument (as when trying to play guitar with a wah bass). Otherwise, the beaches acute (first two) make a classic wah sound in Dunlop (but still somewhat different from GCB95; her that I do not compare in quality, it&#39;s just a little different) . The main interest is to be able to get an almost unlimited amount of wah sound to suit a specific purpose (there are many settings for wide use, and there are even more for very specific purposes. This is because the five band equalizer, because it is very effective to change the basic selection among the six primary tones, a stone to get something personal. But beware, the activation of the Equalization adds a slight saturation in the (crunch it slightly if you are in the clear), then there is no saturation if it is not activated.
It is impossible not to find happiness in this material there.

I use this wah for a year now and I am extremely satisfied. The possibility of obtaining a truly special wah sound is what makes her strong point, obviously, more than having a true bypass that does not alter the original signal.
Without doubt it is true that a MIDI implementation would have been better, to enjoy real-time different sounds that you use regularly (or not for that matter). However, it also benefits its ease of use, and can not always find the outer limits (which are never used continuously), a fact which in itself is simple.
I played on some other models, both in Dunlop expemple than by Vox. I would not compare these pedals, whose use is almost immediate, with a machine that requires more work and research on the sound is desired. They are very good each have their advantages (the simpliité for them, and limitations unique to the infinite possibilities for the other).
What will determine the choice may be the price of métériel. We can not say that the value for money is good or bad: it is material that is sought and that is no longer manufactured. This rack was sold more than 6000 francs at the time they found him in France in the music stores. And today, we should not count on finding less than 900 euros (it is clear on the other hand, given that the argus on the site does not reflect reality; 150 euros, there is frankly laughable. .. no one would be reduced to sell GCB 95 8 euros).
They are found almost exclusively used in the U.S., around the price I gave, he must already have a transformer to get the current 220 volts to 24 volts. At this level, it&#39;s just not a favorite, or an unfathomable desire to want to spend that much money in a wah (especially since the interest is to have a rack that turns not only on the wah, who uses only the pedals do not necessarily find his account with this, because it greatly complicates the circuit from the guitar to the amp).