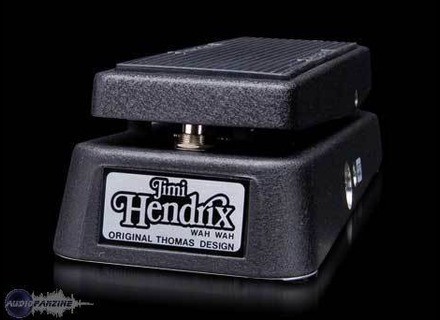 Dunlop JH1 Jimi Hendrix
5
For some time I'd wanted a wah pedal. In the shop they only had that and a Boss digital gadget. So obviously I picked the JH-1. Cost was about 180$.

It's real sensitive. The control range is excellent. Has a very distinct juicy sound to it. Very versatile.

Nothing really. Maybe a bit on the heavy side for carrying around. But that's the burdon of a guitarist.

Building quality is top of the class. Very simple and rugged. When left at a random position the pedal will stay that way, not slipping down or anything.

This thing is worth every penny and more! I was totally blown away when I first tried it. When you have a chance to buy it don't hesitate - this is a must have!

Dunlop JH1 Jimi Hendrix
4
I ordered this accesory from the Dunlop company themselves. I purchased it because I needed a "wah wah" fix, and wanted something that hit the high price scale in wah pedals. I had been cosntantly hearing about Crybaby's, and was always recommended into buying one, but since I'm a serious Jimi Hendrix fan, and I was already playing Purple Haze and Voodoo Child at least once a day, I figured it'd be best for me. I payed $199 CDN (without taxes and shipping) for this wah pedal. It was a good price, for what I recieved.

The added treble can throw some musicians away from it. Unfortunately, if all you have is the wah pedal, and you're trying to use the wah pedal at a certain section of a song, and then decided to not use it, the added treble can make it sound really clangy, and ruin your experience. What would've been nice would have been a toggle, to turn the fuzz on or off, or turn the wah pedal off all together with a foot switch attached to the pedal.

The quality of this wah pedal, construction wise and playability is excellent, there is nothing wrong with it. it's just what you're looking for if you want that authentic "wah wah"

The bottom line, I recommend it, over a crybaby, if you're really looking for a good wah pedal, regardless if you play any of Jimi's songs or not.

Dunlop JH1 Jimi Hendrix
3
I believe this model is the one I had, though it's a bit difficult to tell nowadays as they've been changing it up ever few years or so with new reivisions of which I think are pretty much the same thing, but the pictured one is the one I used to own. The characteristics of which were pretty damn similar to any regular wah out there, with no true bypass and maybe just a slightly tweaked sweep on the pot. Construction is the same as all, steel housing, heavy and sturdy.

Wahs are probably the 2nd or 3rd easiest pedals in the guitar world to ever use. Anybody can use it, you click it on with your foot and rock it back and forth to sweep the mid-range filter and get the crazy, and classic sounds you've heard on slight return

Was this my first wah pedal? Yes. Did I get it cause it had jimi hendrix on it? Yes. Did it sound like hendrix? Not one single bit. I got it, played around with it and kept it around for a bit and eventually stopped using it. I eventually sold it only to try different wahs and of course never found the perfect one. I'm at the point where I know now that it doesn't matter what it sounds like, since all it really is, is just a midrange sweep! And every other wah out there is the same thing with a different sweep range.

So this is a review in hindsight, which of course is better since I now have the knowledge and experience to back up my encounter with the pedal. I think if I still had it now I would've kept it for the rest of my guitar playing life and use it rightfully so without worry for reliability or tone as it sounds just as good as any other wah out there methinks. It's noisy too when engaged, which can be VERY usable by the way...

Your average wah, with Jimi's name on it. Nothing spectacular, and doesn't sound like anything from hendrix's records. I originally got it to try to emulate hendrix and eventually grew up and realized I will never sound like hendrix and so there's no point in trying and it's better to be myself and be my own player. Aside from all this, I did like the wah when I had it, didn't love it but didn't hate it. I find that most of the gear I have, if I have that type of feeling towards it, I end up keeping it longer than i do with gear I completely love. Weird...

Snn procxhe he one of the master, provided you have the good guitar, good amp, the fuzz and good equalizer. DE heads fawns she has character. must not be used to funk, but for good with his energetic rock destroy, made the very well

satisfied with this pedal purchased OCCAZ and delivers that need cutting edge and character to the sound.
Did you find this review helpful?yesno
»
Read the 10 user reviews on the Dunlop JH1 Jimi Hendrix »