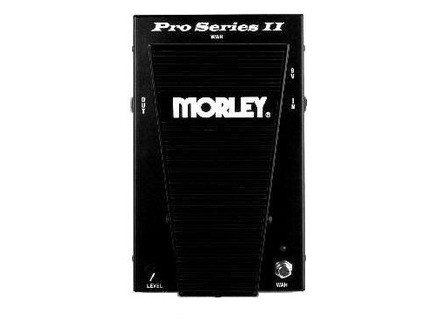 LeMikou's review (This content has been automatically translated from French)

Morley Pro Series II Wah
4
It's a wah pedals. We know what was "wah" qhand descend and "aww" when we go back.
That the it is very simple but what is it that made no noise when it is switched on or that the complexion.
It can easily switch without pressing fort.a can be useful for guitarists who play seated or have bad ankles.

There's no simpler. And of all fawns, there's no need to be a pany to use a wah pedals. Even when it did for the rock I think.

The sound of the Wah is good. But aggressive. I use it with guitars with EMG in a Marshall JCM 800 or a small Mesa trs and sounds good. I arrive with my equipment having the sounds of Metallica or Wah type Zaque Wilde when he played with Brett Sinclair (What is a good laugh!) But it's a little too aggressive for the Jimi Hendrix. But that's good.

I have since last year and I'm happy. was less than the breath of Dunlop Cry Baby I used before and made no noise when it is turned. The sound is not as pretty as the baby cry for the blues but sat in the big crunch and it's cleaner. A good wah pedals for rock guitarists.

bassine's review (This content has been automatically translated from French)

Morley Pro Series II Wah
3
Just right and even more:
-A button to lock (a million times easier than the switch forward type compltement cry baby). We can use the pedals as a fixed filter
PDAL-a itself (which we are interested ...). Although broad and flat.
A-LEVEL knob to adjust the level diffrence-bypass effect.
Red-LED lights (a con but it seems the only wha I have seen with this device, but hey, when one is enclenchegnralement wha we hear).
-Good for a connection is wha: input, output format and 9v boss (the + outside).

The base is metal and you can get (I tried to walk a straight face seal above: INDESTRUCTIBLE.

The sweep of the filter of CONTRL Manir optical -> no knob not breath ...

This is the best equipped of Whas classics. Without fail

Simplicity itself. see above. bypass the sound is, you press the button (the loupiote lights), you Difference Sets the level, you put your foot on the pedals and you do "wha-wha."

A weird but try before you buy:
Crybaby-on, the race is shorter and you'll be leaning lgrement rear, while Morley for you over your right and the race is longer but more centered e (the vertical).
Rdhibitoire nothing, just a matter of comfort.

The overall sound is not too bad but ... a lack of "guts", as say the Anglo-Saxon, what tripe. It is subjective but I have a half box, and a Tubescreamer a fuzz-face, plus I have a cry-baby, so ... it remains a little closet.

I agree with the view to Previous, it's good for mtal rock or FM 80's (90's?) With sounds rather cold without mdium. But for blues or funk 70's, your password is chemin.En I use a little bit but that's because the switch at the end of the pedals Cry Baby was REALLY fills me to the highest point .

In fact, the Baby cry is "OUUWAAH" while Morley is more "OOOWAAH" with an acute perant cot and "breaking" (a bed under the notes but it is probably more intelligible).

Finally, top it's really not if, like me, you like the sound well crados (for cons, if you have an Ibanez with a FullShred ...) if not so ergonomic n'tait I ' would have sold long ago ... (Or, sacrilge, put the trash!)

The sound of the pedals is no longer appropriate at all I play (blues-funk-country) and I do not srement Rasht. Too bad because in equipment, quality ergonomics (RRH! I can cross over the end of the race, it sucks, discontinue to build!) Is top notch.

I would like to try even when the Bad Horsie Steve Vai has a SETTING THE DIFFERENT Q scanning and (and start automatically) or bass Morley on which we can choose normal (the m filter than for me or the Funk (plus I think one of the and / or Steve Vai, one can dverrouiller initiating automatic to use as a filter).

PS if it is not used, the level knob gets dirty and spitting all over the place when it is turned. A Cleaner KF your bombs!

4narchy's review (This content has been automatically translated from French)

Morley Pro Series II Wah
4
The Caracas are OK, there is just enough:
_1 9V battery slot / between a power supply,
_1 Knob volume
_1 Switch to engage the wah
_the pedal itself.

+ - Although the base sounds hollow, all parat relatively strong.

+ As noted basin, the switch is placed o the need.
+ The pedal itself seems in nice shape with its coating anti-draping.

- It happens far too quickly in the treble (I got). The effective stroke is trsrduite and it is sometimes difficult to qualify the effect the way we want. Although sr we end up getting used to but at the level of a leaden feeling a bit overall.
- The pedal sinking all alone, would have one more t feel a little resistance in the foot ..

I can take notice of pan because I do not agree when he says "it's really not that great if, like me, you like the sounds very dirty." For the rest I quite agree but we should not have the same DEFINITIONS

For me this pedal is made out of dirty sound, although it right!

Only once the distal active than the PWA-II began its work of pulling heads Amp
Burton used a morley _Cliff the same kind of pulling teeth.
_with My les paul (pi), I found aisment hardcore noise sounds of 90's groups such as sleepers & co.
_To Get sthg less aggressive just to pass on such a small overdrive, treble and rduire stay beginners racing.

+ + Rhythm aggressive cradingue
+ + Fund sound a little planner
+ On the metal solos I should not comment, saying that's enough for me.
+ I use both on bass guitar (its saturated essential in both cases).

- In critical moments we would be able to support well-founded! However, the treble became so insistent that they screw up their ears. Reduces better test volume in the first instance, to get used to the measurement (and safeguarding; your eardrums). I'll add a spacer to mitigate this problem. At any rate unless already be deaf, I think few people use the pedal its amplitude max (??).
- Totally useless in clean (except for a small breath as if it is not silent branch).

Originally purchased for bass, I first tried a cry baby (spcial bass) before opting for the morley. The cry is very good but the sound too cheesy / groovy does not match my expectations. To give you an idea, PWA-II can both get a sound out of big cats that have titillated "WWWHHHHHH!" with "H" good nervous "rclent" between the throat. Or simply indescribable and chaotic stuff, must love the sound, personal love.

Strengths:
+ + It is with good saturation that Reveals its full potential. You'll get a dirty sound & aggressive wish.
+ Use with a little finger and a lgre overdrive, we get about the results even more Lger same plane.

Weaknesses:
- The effect is progressing too fast in the treble, so it is sometimes delicately to get the shade desired. Too bad it is for me the only downside ..
- No intrt clean sound.

Overall opinion:
_Achete Secondhand a year ago 62, including postage.
_More Time passes, the more I will appreciate, this award is therefore a case. However, it has a well marked, which will not suit everyone.