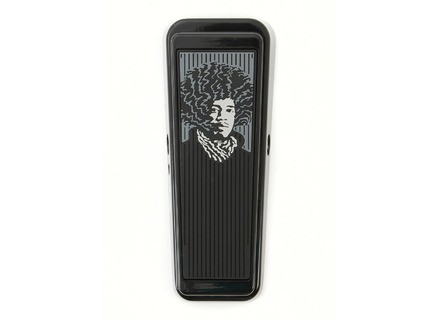 ENG152's review (This content has been automatically translated from French)"Foutage mouth!"

MXR JH2 - Jimi Hendrix 70th Anniversary Tribute Cry Baby
We&#39;ll make it simple, it is a model of CRY BABY output limited edition to celebrate the seventy spring Jimi Hendrix would have been if he had not died at 27 years ... this model Wha belongs to a series of pedal "70th Anniversary" released in 2012 including among others a FUZZ FACE ... OCTAVIO and those who think it smells a little marketing this case there are right ..

I bought this little pedal there not because I&#39;m a fan of Hendrix, but rather because my CRYBABY DUNLOP GCB-95 2006 left me unsatisfied. A word about this: the sound of it was super cool, indeed it was originally equipped with an inductor RED FASEL as all GCB95 for a little while: it&#39;s a small detail which is important ... And, yes, how many of us spend a few extra euros menus to offer this miracle ingredient? Okay, now rummaging well on the site DUNLOP, they say, but do not shout from the rooftops:

For unbelievers (because there always) I would soon review the GCB95 with supporting photographs on my profile ...

Basically my old GCB95 (Revision H) had a FASEL RED, but not True Bypass, which puffed me sound and farted me ... noodles. In addition she had a little too much treble that made my guitar scream too loudly ...

So buying a new pedal on which Jim Dunlop kept the mystery: the fabulous Jimi Hendrix 70th "hand made" with its modified sweep, its tip top finish and supposedly a true bypass. Knowing that Jimi Hendrix "series" DUNLOP CRYBABY JH1-D is actually a slightly modified GCB95, I was also almost certain to find a RED FASEL on this model ... which was the case.


Come on, enough talk, then open the box and detail the craft ...

In the black box and gray there is a certificate of authenticity proclaiming that this pedal is the number as a series of 2600 (I think ...). A booklet dunlop, a short manual and two other three papers. the pedal is in a plastic bag.

Pretty footrest with head above Jimi&#39;s half Decole which is not serious.
Pretty lacquer painting has nothing to do with that my CRY BABY EVH which for once enjoyed finishing thunder. The base plate is screwed bad ... too bad, I dismount, after all I am curious.

The bowels of the beast reveals a printed circuit stamped "CRY BABY GCB 95", an inductor RED FASEL ... no difference with my GCB 95 ... ah if it&#39;s the Hot Potz II 100K while the GCB had a different thing ... It is obvious that this beast that is not "Hand Made"

The general feeling is slightly lower than the GCB95 ... plug in everything.

No special features, this is a CRY BABY everything that has more standard.
The jacks are nothing exceptional.
The pendulum stroke is like a thousand other.
The switch does not sound very reassuring and there is a big sticking point just before you get to the "toes down" (tilted forward ... walk, treble, what) position.

Nothing special out of it ... ah, if the resistance of the balance ("Torque") is not adjustable.

Several comments:
1) No, it really is not true bypass, and it eats the sound even more than my GCB95! ("Tone Sucker" say the Yanks), which immediately eliminates the.
2) The sound is really nice, the sweep is more interesting than the GCB95, serious heel are greatly lower the gain down, but remain well defined.
3) that I do not want too acute, then I&#39;m served: it is understood that DUNLOP did with this pedal. Frequencies were mechanically moved down the beach and the sweep was restricted. this is the kind of change that should take 5 minutes to type a little resourceful ...
4) I note that despite all this I do not have the sound of Hendrix, which makes me giggle: if you could buy a pedal for "the sound of Hendrix" I think she would be successful.

To summarize this short chapter on the sound, it is very close to a standard CRYBABY in less gueularde and able to go lower in the grave. It is also more "voice" in the clear can make things really interesting, however it does not hold a candle to a Vox V846 Hand wired. It is still less wise ... In saturated, it is not bad either. Can be limited by acute a little short ... She is quite expressive in all cases, and to feel that there are three "sweet spots" that successive sound really good: really nice voice this wah there ...

I use it with my U.S. Stratocaster and I&#39;m disappointed to hear the song of my guitar and altered: slight loss of momentum, acute loss: the sound of "lack of air" ... it&#39;s sad!

Finally, there is a pretty far away ... still noticeable even when the pedal is disengaged ... Yep, we&#39;ll stop there ...

What I like is its sounds rather nice, and the wide range over which it sounds good ("huge sweet spot").
What I do not like is the lack of true bypass: it is not honest from DUNLOP: this video there yet suggests that the beast is equipped with this feature:

What I hate is really any manufacturing: it&#39;s cheap.
What I hate is the detestable feel taken for a huge Pigeon: This pedal has nothing exclusive: it is a Jimi Hendrix JH1-D lambda which itself is that a cry baby classic lambda ... which is half of that one.

Jim Dunlop really care about the mouth of the world. Half of its range Wah are GCB95 on which highlights exclusives that are not always (genre. .. the FASEL RED) which charges dearly. This is called a range effect ... I do not think to keep it, it is not sufficiently respectful of the sound of my guitar. Next to this review three photos; Finish "handmade" so common and entrails of the beast