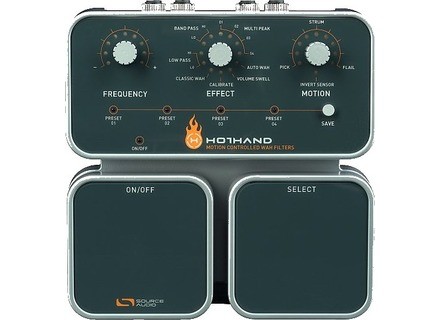 The design is trssrieuse, finishing simple yet futuristic, the pedal is very sturdy and well built.

The pedal is supplied in a plastic carrying case with hard foam thermoformed push the pedal very welcoming and accessories.

Its possibilities are very numerous: the classic wah bandpass through self-wah and multi-peak, and of course the volume.
Everything is controllable by a motion sensor or an external expression pedal (any brand, I'm using a Boss EV-5).
And of course presets accessible by foot.

Brief 10/10: this is clearly the high-end, and even more comprehensive, futuristic version.

Usage is simple:
The pedal board is incorporated normally in a chain of effects classique.il then simply attach the sensor (trslger) on a finger, or anywhere elsewhere (head, foot ,...).
Once the effect triggered the movement imparted to the sensor will control the wah or volume.
The sensor is sensitive and specific on, especially Entirely parameter.
It is quite simple to change and rglage effect, besides the presets available in the foot. Memorize the presets is easy and intuitive.

Upscale, high tech, yet simple to use.

Source Audio has its own algorithms. No question here of finding formulations fawn Line 6.
We can approach wah well known, but most sounds are possible and will bein to indict del-wah of the usual. The classic wah-wah and self band with adjustable frequency drives are nice, but a high pass filter or low pass, or multi-mode peak with the fingertip sensor is frankly again.
As the volume effect sought not the finger is highly effective for simple and beautiful violings.

To be complete, not forget a way spcial: taking "expression out" connects the pedal pedal another audio source (or other instrument with a grip exp in "me j 'to know). The wah or volume pedal is used as the expression to the following effect! Imagine the signal controlling the LFO wah a flanger!

So in conclusion: this upscale, high tech, indict, and the full possibilities go far beyond the volume or wah pedals usual.

Although the price is very sr lev but justified. Everything comes with hard case of transportation!

Small BMOL for wired: cheaper but also much less convenient for those who like to move. The wire leg is not very compatible with this pedal futuristic. But the difference in price to remove the wire is all the same from 140 euros!