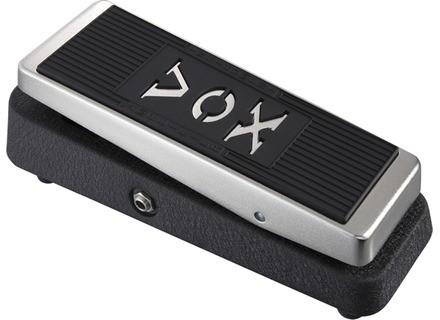 Vox V846-HW Handwired Wah Wah Pedal
3
The packaging is top, pouch for storing the wah, Plexi plate in order to see the wiring done by hand, but look and move away from the look of the Vox base. Short! Marketing has done a great job and is constantly harping on us that it is handmade. Only the hand is one thing, but as for the kitchen, one hand if the products are rotten and the other hand is not experienced bah, it eats the shit!

Note the absence of a 9v jack but given that consumption is not fatal.

This is for the price we are very disappointed! I had the opportunity to compare the three remaining wahs in my short list after eliminating others: V849HW Vox, Budda Wah and the RMC7 Joe Walsh default picture wah more available.
I quickly removed the Vox tasteless, very linear and so far removed from its coveted Vox original made famous by some Jimi.

To conclude a very sanitized wah which may suit some but in no way can be compared to a Vox Vintage.
For the rest, everything is done on the image, but once opened it is far from finishing a RMC.

Vox V846-HW Handwired Wah Wah Pedal
5
Vox wah pedal Handwired V846, the new top model Vox.
Wah, but hand on cable grommet frame with specially selected components.
Among them:
Carbon composite resistors
Carling Switch
Switchcraft Jack inserts
Vox Custom Halo inductor-type specifically for this pedal.
Etc ...
Alim by 9V battery only, it can be daunting to some, but me Me, I prefer having few pedals I do not use the board in power supplies.
No internal trimpots, multi-switches, boost and other "gadgets" in my opinion, this is 100% plug and play and I personally prefer.

We also appreciate that this version is finally equipped with a true bypass this entails avoiding buffer not terrible as the V847A, ie a change in your sound.
It may also regret that despite the apparent quality pedal is still Made In China, especially considering the price, but after all, it should be much more product by Vox UK, so it is not surprising .. .

Externally the pedal is no different from her younger sister more basic V847A, except that the base and the pedal has a different finish, and in this case for me not the best taste. I have kept exactly the appearance of the V847. Same for the small stuff bag-beige cream that seems less thick and strong that the black came with her little sister.
She came with a transparent Plexiglas plate leaving the circuit visible, cool gadget if you like to be the fart, but for those who are interested know that apparently it semblerai it is not necessarily systematic, to confirm and see the purchase ...
Anyway, all this really is not the largest, and beyond that, it&#39;s no fault but rather a lack of power supply. So 9/10.

Yeah it could not be simpler, no need for a manual: you plug it clicks, you can play, and we rappuie to remove the effect!
The wah is not hard to trigger, but just right, not too soft either.
The race is quite usual at Vox: that is rather short. Personally I find it easier to use like that, but others may prefer a long race. However, the expressiveness and the voicing is such so adjusted that it makes it almost easier to use than the V847A I found.
In short, without a fault for which the plug and play like no frills and an old-wah.

Here we come to the main topic: The Sound!
In direct comparison with the V847 (each in turn connected in the circuit back through the amp&#39;s standby and not connected together one after the other, to properly account for the bypass), the verdict is clear: this wah sounds beautifully in a good registry vintage. As usual with Vox, the area where it will excel the first clean and light crunch to big saturation, because of its vintage character, I do not know if she will agree.
Which is nice when you love the grain Vox is precisely that we recognize well the identity of the wah, and when you come from the V847 is not out of place: we find the Sound Vox even if everything is better with it.

As stated in previous opinions, what strikes one first is the character really well and organic vintage voice of this wah, very natural and not excessive in the extreme position. Switched back to the highs are shrill and even less in the other direction the low me seemed less dull and muffled, better defined.

The sweep is really superbly fitted, and if you&#39;re not a pro in the wah it almost seems easier to play than his colleague, precisely because the adjustment of the race is perfect and beautiful sound.
As has been said, there is still a light coat of breath used only on an amp, then to see by coupling with fuzz-type pedals, distortion or OD.
Note that there is no difference in volume between the sound clearly audible without and with wah.

I am going to report what I&#39;ve read on other forums, that the wah does not accomodera all the fuzz. This is perhaps precisely the true bypass circuit and the lack of a good buffer (which could be activated or not depending on his choice, as is done on some pedals for example) or device "fuzz- friendly ".
I will therefore 9/10 because it will not be perfect on this point and also for the slight hiss audible if we play a bit much.

I have only a few days, and I only played a few hours, but I think I am correct in my view, because we feel that we live a good product under the foot. At worst, I will edit if needed

This wah is perfect for those seeking his Vox wah or vintage 60-70&#39;s, with an effect with a real personality and just beautiful on the clean already.
Important criterion for the meaning of reliability in regard to the service of the V847A, only time will tell, and I hope that for the price she did not disappoint on this point, especially since everything else is at top.

I find the value correct for me (who have purchased Effect On Line to 169 € on the good advice of Scorpio, thank you dude

), but I find that almost 200 € (current prices) sounds a bit too expensive for a wah course with the sound quality you would expect at this price but has serious competitors also handmade shop, and even more prestigious ...
I do it again this choice simply because that&#39;s what I like Vox grain and makes it beautifully.
I therefore put him 9/10 because, scalded by the V847, I must see in time how it will behave.

Vox V846-HW Handwired Wah Wah Pedal
5
This is a wah everything from conventional:
Standard format, input, output an on / off switch activated by pressing the pedal. A brief Wah.

The secret is inside instead:
Turret mounted on a circuit like the 70's amp (vox fender marshall)
Components of good quality (polyester capacitor, resistor of good quality, inducing designated especially for the occasion, a well-made potentiometer, a switch brand and solid plug.

And best of all, true bypass circuitry (for once), which will prevent your rhythm has to lose all their attack in the meandering wah if it is not engaged.

The list is long but I think this is the only right way to do a good audio circuit.

Only drawback, no 9v adapter jack (need for a battery)

the amplitude is not too high, which allows it to be accurate in the wah.

the switch is very sweet aided by an ingenious retractable rubber pad.

Note that the front and rear positions of the pedal give maximum matchings very interesting and never go into too much.

It is good that the components make the difference, once initiated, very little extra breath, even amp background.

A warm and full, not an organic nasal wah for a penny.
Downstairs was a lovely kind filtering "I have a cup on the ears" and to top it does not fall into the shrill of morley but we get this boost mids very useful to scream old amps).

Wah this very low volume (clean sound) this amp is well bottom (although am obviously compressed by the lamps of the amp).

I currently play in a plexi marshall handmade and only high-end pieces, and a Strat. So I wanted to have a wah in the same taste.
But it sounded somewhat differently in the amps a bit cheap.

I own this wah for some days and I compared it with a morley classic wah cry baby and a standard.

The wah is clearly closer to that of morley dunlop (actually fortunately) but with a sound more "dirty" and a wah music and much more colorful.

The big highlight is the sound "original" and the true bypass which avoids the use of an effects loop for the wah.

The weak point is the failure to take 9v adapter (besides, we do not see why.

The bonus: she was personally delivered in a beautiful white leatherette bag VOX logo to protect it from dust and a plexiglass bottom plate in order to show all your friends racetrack.