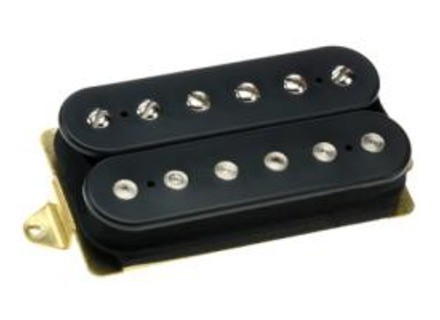 DiMarzio DP193 Air Norton
3
I liked this pickup for a while, I should say. In my prog metal days I had it in an alder super strat along with a tone zone pickup in the bridge. I can tell you what this pickup is good at. If you've heard John Petrucci's lead tone, this is that tone. It's got a lot of that low end punch yet very clear high end even on the high notes. It can sound a little piercing at times but it is a lead pickup so you want it to come through. I would not say the Air Norton is tight but in certain guitars and certain amp settings it can be. Otherwise it's normally pretty boomy and loose in the bass. Most pickups this hot have a lot of hair when they get hit with gain, but the Air Norton retains a clean singing tone even with a lot of distortion. If you are into that, it's a very cool, although non traditional lead sound. If you like hair on your notes, stay away. The AN just doesn't take gain like a normal pickup.

I found it also sounds great for parallel wiring. Normally, I would say the Air Norton was only useful to me as a lead pickup, but switch it to parallel and it does wonderful clean tones. It's almost like a single coil really. It splits pretty decently too.

Eventually though, i grew tired of the processed tone of the air norton. For my uses, it's useless for rhythm. It's voiced too aggressively for lead and chords suffer as a result. I've since switched to more traditional pickups in the neck which prove to be more useful for a variety of things. However the AN is a great lead pickup for a lot of styles. It has a modern sound. I can see why so many people like it.

DiMarzio DP193 Air Norton
5
The DiMarzio Air Norton is probably one of the more famous pickups in their line, thanks in part to John Petrucci and Ibanez using them throughout most of the J-Custom line. This pickup features DiMarzio’s “air gap” technology which basically means there’s a space between the pole pieces and the magnet. It features slugs on one coil, adjustable pole pieces on the other, an Alnico 5 magnet and four conductor wiring.

If you’ve ever wanted a fat, silky smooth, compressed lead tone, this is your pickup. I can’t recommend this pickup enough for those wanting that awesome Petrucci-esque lead tone. The midrange on this is heavy but not boxy, the low end on this is huge without sounding too woofy, and the treble is pushed back to keep the treble strings from getting too piercing. Split coil sounds are absolutely wonderful, and it sounds really good in parallel, too.

If you’ve ever heard Dream Theater, you’ve heard this pickup being used. John used this throughout most of his career, and his current neck pickups are just tweaked versions of this. It works in any wood out there, but I find it sounds best in basswood. There’s just something about an Air Norton in basswood that makes everything seem “right.”

If you’re in need of a fat neck pickup, this should be your primary choice. They’re very abundant on the market, so they should be easier to find than the current variants of this pickup. While it’s struggling to stay relevant with DiMarzio’s recent LiquiFire, it’s still an awesome pickup. Unlike some of the other variants, this has an Alnico 5 magnet which I think really makes this pickup. It’s one of the secrets that helps make the signature tone scream without sounding overly harsh or feeling stiff when doing those fast shred lines.
Did you find this review helpful?yesno
»

DiMarzio DP193 Air Norton
5
(Originally written by mojito753/translated from Audiofanzine FR)
I bought it two months ago and installed it in the neck position of my Ibanez S470 SOL (with its Norton brother on the bridge). I can only confirm the sound quality of these pickups.

In the beginning, I used it with a 9-42 D'Addario string set and I was very disappointed. The sound had a poor definition and no punch. I then tried a D'Addario 10-46 string set and I was blown away. Great sound, very precise. I think the problem was the magnetic field of the pole pieces, which impeded the strings to vibrate freely. So if you're thinking about upgrading your pickups with these (for a higher output level), consider using a heavier gauge string set.
Did you find this review helpful?yesno
»

McREMY's review (This content has been automatically translated from French)" Complment"

Almost everything said on the micro t, but I added my two cents hoping that it might help one or the other.

I Mount handle on an Ibanez RG musicians and my friends told me that they did worse than before distinguished solo, especially on mlodiques arpges such lines which saturated n'tait not the case previously with joe bam. And not only on one type of sound.
Yes it sounds a bit smothered draft.

Finding the paf joe a little too sharp, I orient to something else and have placed the air norton in a more scratch-axis high mdiums handle: there is much better place.

So be careful because it can drown the sound that bring out the guitar in the mix group based on regulation of EQ of the guitar and the guitar type in which it is installed.
Did you find this review helpful?yesno
»
Read the 17 user reviews on the DiMarzio DP193 Air Norton »