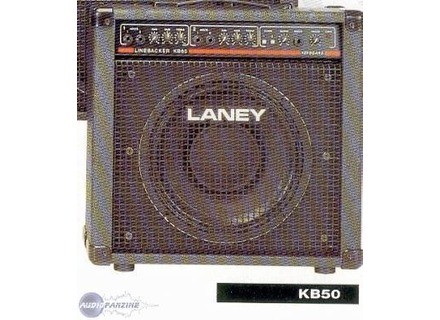 KB50, Keyboard Amplifier from Laney in the Linebacker series.

Laney KB50
5
Great sound, great build quality from a British built amp,Heavy not like the modern stuff, lovely sound from the 12" speaker,dual inputs,I have used the kb50 for the past year only for use but the sound quality from the speaker is really great, I have every confidence to highly recommended this amp as great value for money.
Did you find this review helpful?yesno
»

Laney KB50
2
This is a keyboard amp. It is not light. It dlivre 50 Watts RMS with a speaker 12 inches or 31cm in Diameter, in a way.
It has 2 channels with 2 inputs per channel for a total of 4 inputs in bulk. On each channel, there is also the 2 inputs Specifies: rglage gain, rglage low rglage trebble.
On the right there is the adjustable rverbe. Then it can be run by the two buttons "on / off" to turn on Channel 1 and / or 2. It would be a little malhonnte to say that there is a rverbe adjustable per channel.
There gnral volume, and connectivity, line out / headphones (headphones), remote, Slave / Sun, Send & Return (effects loop). We unplug the speaker plug in the rear of the amp to put another example of 15 inches for more bass. Its just too modest power, the absence of mdiums, and the absence of effects not only earned him a note suprieure 05/10.

Configuration is simple although sr, it just takes 10 minutes to learn. However, the manual is only a 4-page brochure showing the front and rear panel for 4 MODELS of the era: that is to say KB30, KB50, KB80, KB120, all pr cd of "Linebacker". The little explanation is all in English. The above, there were only gure of respect for the consumer so silent cens speak English and be dj "in the". Plus, they do not show the same technical data that we note, in Contents of impdance lctrique and consumption.
In sound, it's pretty straight forward and standard trs. It is not trs end, and there is nothing extraordinary. When I put my own 80%, I felt that the sound was going wrong. And as he must get out 50W RMS for group play, you dfoncez your amp, unless there ale no battery! Now as much on the quality of sound on the power, there is a minimum of the same: it is not at 15 Watts!

I got it in late 1995, today it is dead and buried as APRS ale crackling amp but I have not used much. Of course I plugged a little bit of everything on it, but a keyboard amp, it is all the same made for that. What I liked, c'tait the 4 inputs because it is true that it allowed to plug a lot, however, was entitled sparon that 2 inputs, and therefore, we can prfrer a Peavey KB100 amp like that, with that 3 comes in bulk instead of 4 like this, had all of the same three REALLY spares (and yes , 3 channels instead of 2). Another thing, you can apprcier on each of two channels, one can rgler Bass and Trebble. Thus, the person plugging a keyboard in wanting to have more bass than the other indpendament keyboard can change its low and high frequencies. I tried several MODELS such as KB-30 Laney, Laney KB-80, and Peavey KB-60, it seemed to me the best quality on the sound. Qualitprix related to the KB-50 by Laney tudic'tait enough inintressant: F 3000 I think! I would do if this choice? Djl'ayant Nol had, I did not really have a choice (but thank you!), But I'd take the Peavey KB-60 or the KB-80 Laney rigor to the extent o it possde a tweeter unlike KB-50, the possibility to connect a CD player and a microphone, which is impossible with the KB-50 (as the signal is too low, it was necessary to connect a mixer before) and a high power output of 80 Watts RMS! As for the buttons, they are easily pulled (on all Laney notice ...), you should not lose the way! For résumé, with Laney KB-50, or we remain in the home studio and in the context of the background music (even in the collection's outdoor, spits a lot!), And we right to his means, but it is put certifisoit group in the middle of a battery, and it is not enough, you'll be back. WARNING! The picture that REPRESENTATIVES pretty good amp, is the English version of the era. I did not find the photo of my amp, but set apart a look just the same thing changc'est.