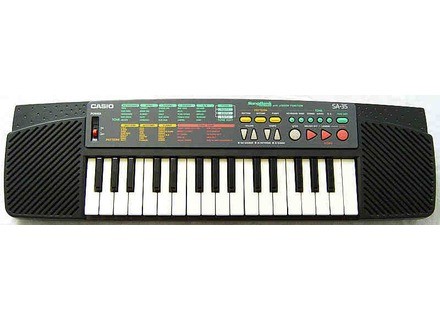 GoodPalmito's review (This content has been automatically translated from French)

Casio SA-35
4
Small toy keyboard without vlocit 2 and a half octaves. stro.
not noon he was not dreaming, you'd think he did not sound much but in fact it reached when even the 100!
there are 20 preset sounds and each can be dclin and 5 variants by pressing the "edit" button. of course it is impossible to edit sounds, it's just a fawn select the 100 presets without entering just a number

some rhythms, an interesting learning function, accompaniments that are played in the background and you to the main melody! very well because at the beginning we use the white keys, and then after it is forced to enter the Dizes! useful for beginners to learn to play with Dizes forcment without giving false notes

Utilisationn not need very simple instructions.
no edition or effects.

I did not I have played by going to a friend

+ Very beautiful sounds of a toy piano sound very pleasant in the treble, original sounds like "plunk extend" that sounds incredibly well !! brief the system of sound synthesis is used rather powerful!

no ngatifs point it is an excellent report qualitprix, even some pro will may be interested in some of its synthetics each sampler sounds.
Did you find this review helpful?yesno
»