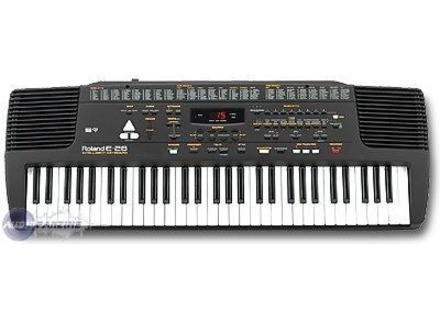 Roland E-28
5
Arranger, see photo
full of sound, rhythm, accompaniment.
it's like a yamaha PSR, but instead of having one's shit, it's a Roland!
MIDI input
(On E21 there's no MIDI input, the E28 can be used as a sound module ...)

Who says Roland said use super simple and full of functionalities.
manual well, there's everything you need

I used it one year to make the scene in a group, the roland stuff is super reliable and robust, it's what I like the Roland 128 sounds, several very good organs, pianos sublime, in fact the keyboard is a little weak side has sound. in the end I plugged in sound module on my digital piano.
unbeatable value for money
and I want a piano sound, I choose roland, other trademarks are low at this level
Did you find this review helpful?yesno
»

The particular feature that I too c'tait AIM because I had a E-36, I am confused at all in the sounds that I liked less well elsewhere (issue got, but I would have the ressaye). Then they changed the paramtrage automatic pitch. It's not a ton, but a semitone. And as it is located on the E-16, ie in the middle of synth which is never convenient. In addition, it is key.

I do not remember the exact price of the era, but I remember they had a lot down before. I am confident that the report qualitprix silent excellent.

For me personally? No, I'm tired of trainer to the synths that have no rde crtaue styles or user programs.

Roland E-28
5
It's a synth with 176 sounds and about five octaves I think, with a short MIDI jack connection There is almost everything you need ...

It is Super easy to use. &nbsp; I had to use it without notice and I immediately understood how it works so 10

I used the E-28 for three years or more (I got it for free, it had a few problems I repaired and frankly it kills the piano. &nbsp; It is a solid piano sound (at the same time it's Roland synth. ..)and has a really nice action.&nbsp; It's piano organ is average but otherwise it sounds too perfect (from the drum & bass to the sound of flute extremely well modelled!) I tried a yamaha also in the same type of gamma 7 but with octave and I think this one deserves to have more but you can just increase the octave has a button so it makes up for that much now.&nbsp; It is unbeatable value for money because I got it for free.&nbsp;&nbsp;&nbsp; (The repairs were extensive but I'm really happy with it now )&nbsp; and frankly I'm not ready to abandon it yet.