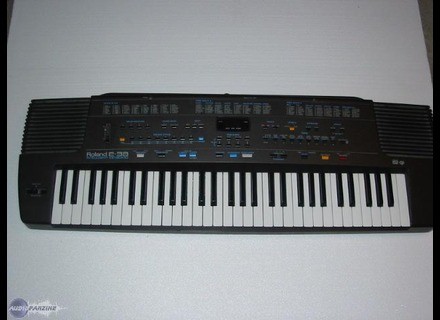 Internally, with 223 tones and 64 musical styles, it is the same thing as the E-28 except that this level has an an extra a card reader for adding styles (TNSC -2). This is the new version of the E-36.

No posibility to edit, neither in sound nor in styles.

Yes, the configuration is clear as the manual.

I did not. I-36 E and even the E-35. The E-38 The series followed with new sounds and new styles. You could however find the same with our maps of TNSC-2 guard. I test it silent trs well, even if it takes some getting used to new sounds, you lose a foot to beginners, but okay. The quality of sound is irrprochable is empty. Rhythmic variations with 4 instead of 2 on the E-36 Previous of 1993, gts silent. And as for the pitch wheel. Another major point is the available Dual Voice: and yes! The two sounds can be shuffled, which is impossible with the E-36. It also parat the E-38 possde trs particulire a computer interface of its own and I do not know at all. Amplification is notified 2 Watts X 4 instead of 2 x 3 Watts as the E-36.

Damage, however, that Roland did not choose to will integrate connectivity Midi Through. Ct Balance is less than the E-36. Whether the E-14, E-28, E-38, all of the same era, there have only Scale 4 instead of 6 as the E-36. The E-38 removes the lower and the effect section which is a shame. Whereas they have covered the Upper 2 Lower apparent, so it's a splitage DIFFERENT than the E-36.

As such the would it be better to invest in E-28?

See however the cards TNSC-2 which is