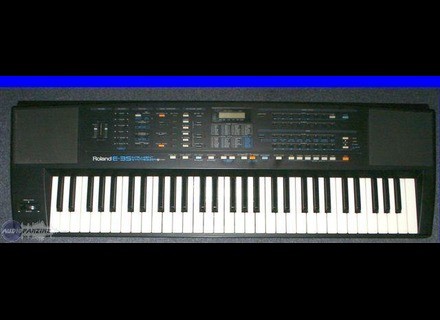 Roland E-35
3
Suprieur of E-15, and infrieur of E-70, this instrument from 1991 is a home-keyboard (keyboard arranger) 5 octaves or 61 keys, touch dynamic. This dynamic can be disables when needed.
Question connectivity, the E-35 is fitted sound output OUTPUT L (Mono) R, between a support for pedals (Sustain Footswich), MIDI In, MIDI Out and Through, card slot of musical styles like Roland TNSC TNSC-1-2 and compatible with the large map MSL-15, headphone (Phones), taken to area.
The E-35 has 128 internal sounds and 8 drum kits (Drums) which multiplies by 8 the wealth of drum sounds from the E-15&#39;s infrieur he repeats the same sounds.
With 56 styles, including original style, style variation, "Intro / Ending," the "Fill in To Change / Original", "Bass Revolving Agreement," "Advanced Arranger", "Start Sync", "Chord Intell "The E-35 includes a large varieties of styles of all types: Rock, Reggae, Beguine, Big Band, Arab, etc ... He has seven Banks of 8 styles each is 7 * 8 = 56 styles, all quality cd.
No edition is available both in the sounds or effects. It has a select of a single Rverbe and / or a single chorus on the entire instrument. You can also remove them completely.
The E-35 derives its strength in its internal religious squenseur the "Keyboard Mode". We can therefore record 6 tracks: Upper, Lower, Manual Bass, Arranger, Manual Drums, Sound Effects, and save the indoor three pieces of the instrument. The rptition infinity is still possible (loop). The backup is a lithium the indoor.

The configuration is simple to gnrale Accs. I do not currently have the manual, difficult to get, but I am sure that is clear, and in French.

I have been using less than a year since I bought it used in Italy. The MODEL is unique in Europe regardless of the country against.
The specifics are that I like above all the possibility to program the bass line of the internal squenseur and given that the arrangement with "Revolving Acc Bass." It is the squenseur apprciable, and even the sounds, recognizing that quality Roland, they have not t bad. CHAC sounds and styles is faster than the E-15 due to the fact that there ale four columns instead of two. Ar and therefore it is more clear. More styles, and they put down the "Card" instead of an 8th bank in order to add styles. The compatibility with the cards TNSC-1 (pre 1993) and TNSC-2 (APRS to 1993) is a good thing trs. The MSL-15 that often combines silent because it allowed to double the number of styles including all the cards TNSC-1 and gave one more look "snoring". Squenseur before the "Keyboard Mode" is fundamental to play a low hand, and split the instrument correctly. With the E-15 trs is difficult because it did not.

The points I do not like much are the following:

- Impossibility to record the songs on internal memory card that highly pnalise the instrument,
- The number of sounds inadequate,
- You can not choose the height of splitage,
- The screen is not rtro light so that we can not see anything on an incidental,
- The pitch is not adjustable
- They are no simplified style as the E-36 and E-56 (Bank 8 missing), so the beginners will be more difficult, especially:
- THE E-35 still has BACKGROUND NOISE OF ORIGIN. STATION TO THOSE WHO DO NOT LIKE WHEN CA WHISTLES!

It lacks many sr user programs, and the possibility of CRER is his same style. This is what the E-70, the MODEL suprieur whose default of not having a floppy drive, fixes something with the E-86.

Although sr I test many before acqurir MODELS. Basically, the I-36 E, the new version. For this new, they added sounds, styles, a "Gnral Midi", but they had deleted the squenseur internal connectors Midi Through the LCD screen, the pitch wheel, and card reader is not compatible with cards TNSC-1. But with E-36 can select the height of splitage. In short, impossible to say that one is better than the other.

The report qualitprix: This product was worth about French francs in 8000 to 1992 inclusive. C&#39;tait an era for the super synth with a sound frica. I took a chance in 2004 to less than 1000 Francs Franais including shipping, but he cot a lot of repair. I can not advise if it is not in good condition and not a reasonable price. Take a synth plutt nine as MS-15 or MS-25.

I would do this election if I did not try because it&#39;s been awhile since I wanted connatre in depth, but I&#39;ve had enough pond. Me, I need a synth better than a: a suprieur as E-70 or E-56 at least. The E-56 contains all the CHARACTERISTICS of E-35 and E-36 edition with the added sounds, user programs, and apparently the possibility unlike the E-35 to record the pieces of s quenseur the card reader with a M-256E I prsume since the E-35 is the key brand "Track erase" but the E-56 trademark "Track Erase / Whrite". Its dial is rtro light this time. As for the E-70, it includes all the features of E-35, but with more user programs, and crateur styles which can truly use her as if they taient Creations styles internal with, so the keys Intro / Ending, Fill in to, Start / Stop, etc. ...

Just look at all the cards that accept E-35 is standard! It competes with the keyboards of today I say to you: