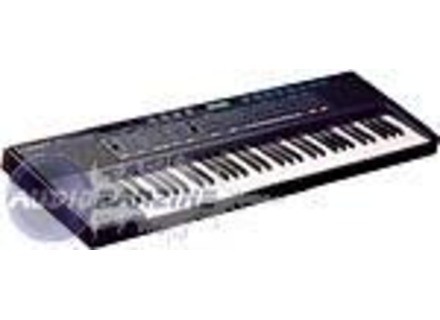 SAPENA1966's review (This content has been automatically translated from French)" 21 YEARS LATER ..... still there!"

use relatively simple
with some upper and lower bass

I confirm that this is good stuff
it still works perfect!

since then I just changed the battery in either € 8 to 21 years of use it will, reliability, I think!

there were also cards that could put style and the registration cards of songs (I bought two!)

there are also effects of sound environment as room, delay ....

glennouille's review (This content has been automatically translated from French)

Lots of buttons, menus and no extension, an easy to read LCD! The manual when to him is not clear enough ...

So I since 1988 and has always made service! He now serves as a drum machine, MIDI player, and dial pad. I bought a "cracking", it was 10,000 francs at the time. Although now, for 30 euros, we have a sound card with FM synth much more developed, it remains plugged into the studio and still serves. I have not tested all its possibilities, but I would never throw, be it for investment, for 10,000 francs together when you are 12 years is a memory intarrissable! Especially since it was the appearance of keyboards general public, and I did not know that electronic music was so much to develop to make this kind of instrument quickly exceeded.

But if after 17 years it still works is that it was good stuff! I put that opinion more than anything else about nostalgia, since it is the instrument that put me on the path of music!