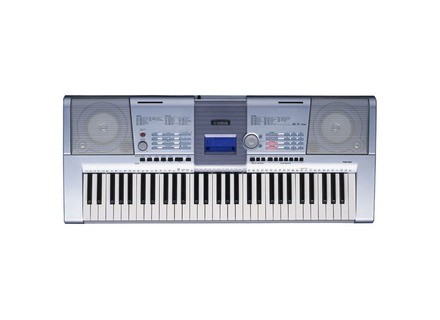 PSR-293, Keyboard Arranger from Yamaha in the PSR series.

Yamaha PSR-293
4
The Yamaha PSR 293 is a digital keyboard that spans about five and half octaves and has built in speakers. It has 1/4 inch connections for sustain and a slew of other options as well as outputs if you want to send it to an amplifier. It has a digital screen to choose different patches and that shows you which notes on the keyboard are being played. It has some built in reverb and a ton of different rhythmic patterns and other options for composing.

The configuration of the Yamaha PSR 293 is pretty basic and easy to follow overall. It is designed for beginners, so it has a lay out that is easy to follow and understand. Scrolling between the different sounds is easy, as it has all of the numbers written on the keyboard in plain sight. While there are a lot of things that this keyboard is capable of, if you are interested in using a certain feature it is easy to figure out how to use it quickly. This being said, since there are a lot of features available, it does take a little time to understand exactly what everything on this keyboard does. The manual for the Yamaha PSR 293 is pretty complete and if you are a beginner it is probably a good idea to have it when trying to learn this keyboard.

I've been using the Yamaha PSR 293 for about five years and I have found it to be a nice keyboard for the beginning player. It is easy to use, and while the sounds on the keyboard aren't great, they are usable for practicing and trying to learn the instrument. This isn't a keyboard for any experienced player, as the samples simply aren't real enough sounding. The price makes this a great deal for people who want a cheap digital keyboard to start to learn piano on.
Did you find this review helpful?yesno
»

i think it is well built, i just got it

Sounds great, no problem what so ever

Originally posted on FutureProducers.com
Posted by: tdg bassman ( 9-, 2004)
Did you find this review helpful?yesno
»

If you read the manual and follow directions closely, you can easily hook it up to pc/mac for Midi controlling with included software. Works with virtual instruments with many programs (I used cakewalk).

Overall pretty clean for a keyboard. Can't produce sounds like a Yamaha digital piano, but it's also $300 cheaper.

Well built, it's a Yamaha

Good for practicing keyboarding. Decent for MIDI controlling. USB saves the hassel of dealing with usb-midi interfaces. Can't hook it up to hardware sequencers/samplers though. If you like making beats with computers, for around $200, it's great.

Originally posted on FutureProducers.com
Posted by: showtunesmusic ( 5-, 2006)
Did you find this review helpful?yesno
»