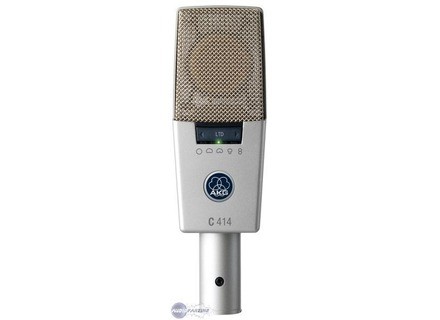 AKG C414 LTD
5
The AKG C 414 LTD is a limited edition version of the ever popular 414 condenser microphone. It was made throughout 2007 as a 60th anniversary edition of the microphone but is no longer made and most likely won't be made again unless they do a different anniversary edition. In terms of it's sound it's much like the more modern versions of the 414, but it has a unique look that helps to set it apart. For technical characteristics, it's got 5 different pick up patterns to choose from just like the other 414 mics, including cardioid, wide cardioid, omnidirectional, hypercardioid, and a figure eight pattern. It also has a frequency response ranging from 20 Hz to 20 kHz and a switchable pan and low cut options at 40 Hz, 80 Hz, and 160 Hz.

While I don't know if it's worth it to seek out this limited edition version of the AKG C 414, if you do come across one it's going to be as good as any out there. I recently had the chance to borrow one of these from a friend to use at my home studio to record percussion and it sounded amazing. I didn't have the chance to try this against any of the other various versions of the 414, but I've used a few different versions of them extensively and could tell pretty well that this was in the ball park as the others that I've tried. In general, the C 414 is one of the most versatile microphones in the game as it's useful for pretty much any application where you'd want to use a condenser mic. I'm not sure if the C 414 LTD will cost more on the used market since it's a limited edition version, but it probably will. I don't think it would be worth spending more on unless you're a collector of some sort. For those with a home studio on a budget or those who are just looking for any 414, I'd go with whatever you could get the cheapest and the C 414 LTD probably isn't it. Still, it's an amazing mic like any 414!

AKG C414 LTD
3
This microphone is identical to C414B-XLS except his silver shell and black suitcase year instead of a black shell and a silver suitcase for the XLS. This is a limited edition.

View my opinion on the MC48 Nevaton that I compared with an XY pair of a C414B-XLS and a C414_LTD whose frequency response measured individually statements are almost identical.
Did you find this review helpful?yesno
»