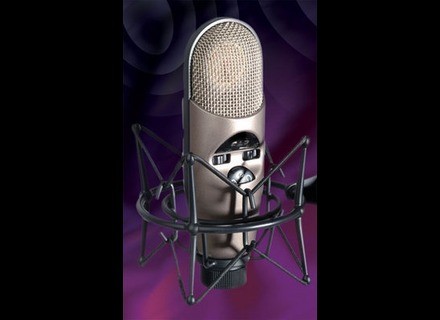 CAD M179
4
This mic has a great quick response for singers that have a thick low voice. It provides a great top end boost at the high mid frequencies. If you have a real treble sounding (3.5 to 6K) voice I would go with another microphone. I always say that you should choose a mic per vocalist if you have the money. Now a days you can buy so many great mics for under $200. I would use CAD mics for clean singers. It does have a lower distortion rate or speed I noticed when placing on a guitar amp especially. We set up a mic for guitars the other day and it was laying out so we put it to use. After the guitar player turned up his amp to the levels that he plays we noticed it was rather clean sounding and a bit mid rangy. I think it may have been his cabinet but my ears were telling me it was the mic. We did not compare it to another we just went ahead and recorded the mic the way he wanted. We also moved the patters and it worked better when we asked the guitarist to turn down a bit. Remember that these mics are not made of real high quality components in that they are cheap by nature. Most younger producers like CAD. I am not a huge fan but for the money I do think this mic is a pretty good buy. I would not consider it as a record or hit record vocal mic. There are many differences in the sound of lets say an expensive AKG like a 414 and this mic. Most of these cheaper mics have a real buzz that happens at about 5k to 7k sometimes even I can hear it with some vocalist at about 4k and that is annoying if you have a female singer that uses her nose. It is a cleaner mic so I like that. I compare it to the LUNA by M Audio and I think they both have the same sound in some ways. They are both around the same price and they both have that high mid tone. I will say that a few of my students like CAD and have used them for years and it is a good company. If I were choosing between this mic and SPARK by Blue I would go with the Spark as it can take a better front end hit and has a similar boost but is not as noticeably mid rangy. I do like the CAD line and I have had some success with them. At the price point this is a good by.

For very clean singers it is a great buy but for loud singers I like other microphones. I like the crisp cleanliness of the CAD mics in general but it really depends on the singer so pay attention to the sound of the singer. Get right up to their voice and study their vocal sound. If you hear a great deal of nasal cavity you may not like this mic, if not you will. www.chrislieck.com www.comia.us (recording school). It is clean and is most of the CAD line. They are really nice mics for the money and like I said they are good buys but if you are looking for a great vocal mic spend the money and get a really pro mic like an AKG 414.

CAD M179
5
The CAD M179 is a well built condenser mic with quality and options rarely, if ever, found for it's price range.
I personally have never used it live, I bought it for in-studio work only, but I think with the proper caution necessary for using ANY condenser live you should not have any major issues.

A first look at the M179 will reveal 5 different pick-up patterns, a low cut filter, and a -20db pad! Many microphones that sell for much more do not include any of these options and some that do only have a few.
For the price, the options alone should be an attraction for the "ever thrifty" buyer. But the CAD M179 also delivers a really good sound. Not the best, yet just as good if not better than many other competitively priced models from other companies.
The M179 performs brilliantly on a wide range of sources. Acc. Gtr., Elec.Gtr, Bass cabs, Upright, Vocals, and pretty much everything else. I would suggest having a pair for certain sources, like a grand piano for instance.
Another thing to note is the versatility of this mic. I've found that it does an amazing job with off-axis applications. Here is a crude example of mic-ing a vocal like this: position the mic about 1 foot away from the singer and aimed just over their head. I hope you get the gist of that otherwise I appologize for not getting my point across.
The M179 also shines in distant or room mic applications. If you have a decent live drum room and you're looking for that full room type sound, try putting the M179 way off in the opposite corner from the drum kit, then mix it in accordingly with your close mics. The M179 will not dissapoint and it has a high enough spl rating to handle that loud of a source. The same also applies with getting a good room sound with guitar or percussion. The M179 handles these applications equally as well.
The only complaint that I have with my personal M179 is that the XLR connector literally fell out of the casing. This is fixable but is honestly a real pain to accomplish.
I've, of course, used many, many different condenser mics over the years and I must say that the CAD M179 is a versatile and fairly high quality option when stacked up against the competition.
Does it sound like a high dollar Neumann? No, just No. Is it good? Yes, a resounding Yes. The CAD M179 is a solid choice and if you get yours like I got mine it also comes with a nice metal, padded carrying case as well.

rollandh's review (This content has been automatically translated from French)

Used successfully for several months on open sources.
Top: the snare (in hypercardio and low-cut engaged), but also overhead, on vocals and guitar on occasion (even if I prefer my 930 for their sonority Beyers faster in this case specific on).
Treble not too aggressive (even at all), full spectrum fairly straight (Type 414), nine frankly for the price which you can find it, it's really really a sacred matter.
I have one, I'll take a deuxime in the year.
Who said he had always loved to make good hardware? There are exceptions, and frankly, this type of microphone is a part.