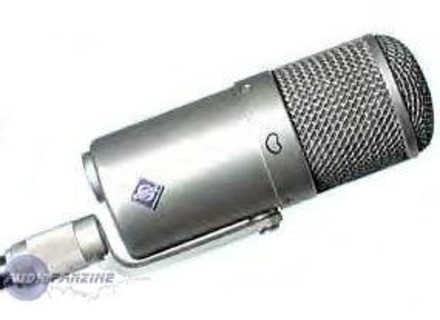 U 47 fet, Large diaphragm condenser microphone from Neumann in the U 47 series.

View all offers for Neumann U 47 fet »

Neumann U 47 fet
4
The Neumann U 47 fet is a electret condenser microphone that is great for kick drums.  It has a half caridiod polar pick up pattern and has an XLR cable connected to it.  It can be used in a live setting or when recording, it will reach its full potential when being recorded though.

I've had the Neumann U 47 for about four years and while I don't use it all the time, it has a lot of uses that come in handy for a lot of different things.  This microphone is really designed for use in conferences and things like that so you can pick up the entire room, and I have to say that when you place this on the floor or on a table within a room it will definitely do a good job of picking up everything that is going on around it.  For this reason I have used it during live shows and have found that if you place it on the stage it does a pretty good job of picking up the vibrations.  I have also used it in the studio and works in many occasions as a room microphone or even if you place it within a kick drum or something like that.  While this microphone isn't the most versatile in terms of traditional audio recording, it does have a lot of uses, many of which aren't best suited for recording music.  While I haven't used it for this, I'm sure that it would do a pretty good job even as a broadcast microphone or simply for picking up conversations or something like a book on tape or something.  It has built in EQ that I would imagine is boosted at around 5 KHz to add clarity to the human voice even though its not made for voice.

Neumann U 47 fet
4
The U-47fet is a great kick drum mic.... Musicians have been astonished to see me put one on a kick , but it can take it  ( in addition to the -10dB pad there is another -6dB pad adjacent to the XLR connector).

They are also nice for bass guitar , and can be good for piano. I prefer them to U-87 on vocals. However I must say here that I've never liked the U-87 as a vocal mic in 34 years of using them.  I found the U-47 could give sibillance problems on female voices, especially when used as a voiceover mic.

I wish I still had my U-47 - a rapper stole it from my studio shortly after I had the capsule reskinned! Doh! They are now ( 2009) seriously escalating in price, and in the UK 2.5k GBP might be average for a used one. Neumann have not made the U-47 fet for some years now.

Neumann U 47 fet
The Neumann U 47 FET is a large diaphragm condenser microphone that is has a standard XLR connection and has a special transistor known as a field effect transistor (FET).  The microphone comes on its own swivel mount and is has a cardioid polar pick up pattern.  This is strictly a microphone for use in the recording studio.

I first used the Neumann U 47 FET about five years ago and to this day it is one of my favorite microphones.  I've only used the microphone for vocals and for organ, as I've only been able to use the microphone a number of times, but for those applications it really sounded great and I can imagine it would sound great on pretty much anything.  Since this is a vintage microphone, it definitely has that warm vintage tone and while I wouldn't say it colors your sound, it does have a certain presence to it.  Because of this unique sound, it is probably best to use this microphone for applications where you want an especially thick and warm sound.  Although I've only used the mic a couple of times, just from using it those few times I feel that this is one of the best sounding microphones that I've ever had the pleasure of using.  Since these are older and no longer made, the price on these is pretty astoundingly high, and for this reason unless you are a professional engineer or studio owner, it isn't even worth your time looking to try to get one of these.  The Neumann U 47 FET is one of the best mics I've ever used and if you ever have the chance to you it it is something that you should definitely experience.  All in all, the Neumann U 47 FET is another classic mic in Neumann's famous line of microphones.

Neumann U 47 fet
5
This condenser mic is for studio use only. It has a cardioid pickup pattern and a high tolerance for SPL. The mic has been around since the late 1940s and was an enormously popular mic for years (and still is, although they haven't been in production for quite awhile.) All Neumann mics are highly regarded and this is no exception; in fact, it may be the microphone that has been most responsible in getting Neumann the acclaim that it has garnered over the years. It is particularly good at recording vocals. I've also seen the head engineer from the studio I work at use it as a room mic in many different scenarios (when recording drums, bass, and piano). I've never heard it used on any session where it didn't sound good for whatever capacity it was used in.

I have been using this mic since I started working part time at a studio as an intern (over six months). I've set it up for a number of sessions and it's really not too difficult to use. Getting a good sound out of it is a breeze. I've heard it with many different preamps, including the ones that come standard with Focusrite mixing boards, and it's always worked incredibly well. It would probably be my go-to for most vocalists unless they were looking for a less clean, pristine sound. I don't own one, but I use it on a regular basis so I would be pretty keen on buying one if I had the money. I would have to advise, though, that paying for one nowadays can cost a fortune. Only use it if you're never going to take it out of the studio and you only let qualified people handle it, because it's also a pain to get fixed. However, it's also arguably the most impressive mic I've ever used. George Martin allegedly claimed that it was his favorite microphone. If that doesn't make the case for it's quality, I don't know what does. I would certainly say that if you can afford it you can't go wrong.

Did you find this review helpful?yesno
»
Read the 7 user reviews on the Neumann U 47 fet »

Neumann U 47 fet manuals and other files