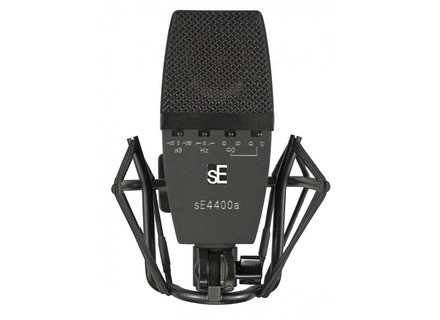 first "real" micro stuff I used before PA or Karaoke

- It sounds pretty medium, personally I'm not a fan,
and the attachment is not solid plastic

it is very good, very well mean the smallest sounds

I think for the price it is cool

eonoz's review (This content has been automatically translated from French)

sE Electronics sE4400a
4
Prima board you'd think a copy of the AKG C414, but to have one, I must confess that this micro there has something else ... no less no more, just something, so do not stop at appearances and understand he has a character all to itself that can not be found either on the 414 or a neumann.

I appreciate his multi-directional microphone that actually suited to any situation in the studio or on stage ...

1 month 1 / 2 of use, surprised at first because I was expecting something else, I first thought it was an entry-level microphone designed primarily to avoid the investment of a micro-cost and it being a sort of micro substitution, but I finally understand what micro and searching a bit, j'i discovered its possibilities by experimenting on a bit of all types of sources.

To have at my disposal a fleet of pickups pretty nice, I love this kid on who has found a special place in my modest collection.

It's a very nice tool manufacture and delivered in a suitcase enough class ... It's not always guarantee quality, but it's still very enjoyable. The clip on the other hand is rather fragile and I plan to tinker a piece of metal to replace the part of "holder" which is plastic.

His side:
It has a strong character and a very warm sound ... <img class="smiley" src="/images/audiofanzine/interface/smileys/icon_biggrin.gif" alt="biggrin" /> I like this color! (Especially when it comes to him a little -20 in with a TBP binding in this case, it offers a beautiful clarity that comes out very well the harmonics of an acoustic instrument or the sound of a voice ...
I also used on battery and taken it was very effective: transparent in the sense that it did not destroy my sound nor did détimbré ... Excellent microwave background (like the 414 elsewhere)

This is a purchase that I have absolutely no regrets and I think even having to make another pair ... unless I find a small briefcase paired factory ... even better ...

The price is a little high but nothing to do with the mic in its class (other Studioproject, AKG, Neumann and consors ...)