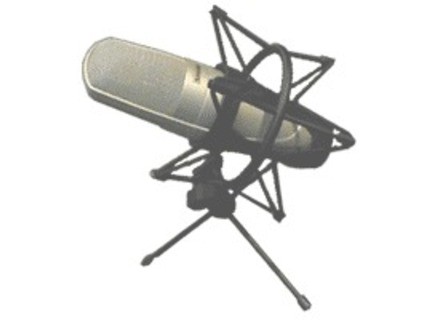 All user reviews for the Shure KSM32

Shure KSM32
5
The Shure KSM32 is a cardioid electret large diaphragm condenser microphone that Shure advertises as being perfect for vocals. However, the microphone has been known to fill in a very complete workhorse role. This is because of its very respectable specifications. The KSM32 has the typical condenser frequency response range from 20 Hz to 20,000 Hz, and Shure makes it abundantly clear that there is a slight presence peak at 7,000 Hz in the high midrange and at 10,000 Hz at the low high end. The KSM32 has a 15 dB pad on it that allows it to handle a maximum SPL of 154 dB, and it also includes a three position bass roll off switch. The Shure KSM32 has a low self noise at 13 dB, and a high sensitivity, making this a relatively quiet microphone. Those stats are not stellar, however, since more impressively numbered offerings have made their way into the market. However, a musician should not split hairs over a number, and the Shure KSM32 sounds good. That is where it counts.

The Shure KSM32 in practice is an incredible workhorse in the studio. The fact that it is supposedly tailored doesn't prevent this microphone from fulfilling a great number of roles. If one uses a KSM32 on everything, be it overheads, guitar cabs, lead vocals, backing vocals, a number of other instruments, the one thing that everyone is afraid of is already absent from the mix. There is a very significant lack of frequency bloating.

If you could only have one microphone, this is a very useful one to have. It is certainly a contender for a desert island condenser.
View price information
Did you find this review helpful?yesno

Shure KSM32
4
The Shure KSM32 is a large diaphragm condenser microphone that's for use in the studio or for broadcast purposes. The mic looks the same as most the others in the KSM series, like the KSM44 which is one that I've got more experience with. The KSM32 has a cardioid pick up pattern and has got a frequency response range from 20 Hz to 20 kHz. It comes with it's own hard shell carrying case as well as a shock mount and mic clip.

The Shure KSM32 is a great option for a large diaphragm condenser microphone in any studio. It's best for the home studio owner looking for a great microphone at a great price, as it's got a professional sound without having to spend a ton of money. There are plenty of options in the KSM series, but the KSM32 is as good as any for the price. It's not as nice sounding as the KSM44, but it's also about half the price. I've used the microphone for a few different purposes, mostly as a vocal microphone. I recently helped out on a radio show that was broadcast from the studio I work at, and they were using this microphone for it. It was perfect for the job, as although there are better sounding mics out there for sure, this will get the job done in this situations more times than not. Having said this, I'd rather have a Shure SM7, which is about the same price or a little bit less and in my opinion is one of the best microphones out there, period. However, as far as condensers in this price range go, the KSM32 is definitely up there with the best. The KSM32 is worth looking into for anyone who's after a nice large diaphragm condenser at a more than reasonable price!
View price information
Did you find this review helpful?yesno

I bought it in the USA five years ago.

Very smooth sound with my Avalon preamp, perfect for vocals and acoustic instruments.

It's my universal microphone.

Incredible value for money (way ahead of Chinese mics).

Standard mic in US recording studios and on stage (for overheads, etc.).
View price information
Did you find this review helpful?yesno

Shure KSM32
4
The Shure KSM32 is a side-address, cardioid condenser microphone for studio recording and live sound productions. It reproduces a natural sound of the original source. It's light weight (490 g). 55.9 mm (2.20 in.) maximum body diameter, 187 mm (7.37 in.) long. It's gold plated and uses the XLR input for a higher quality of sound. It's got a nice feature of switching from 0 or -15 dB. A low frequency Response switch -6 dB/octave below 115 Hz, -18 dB/octave below 80 Hz. It also using phantom power. If you are wanting to use this mic in your recording interface or PA, you better have some phantom power. It comes with a good mount for your mic stand and case to carry out for the road. The case does scratch up easily though. I would use a pop filter with this. I liked the strong grille and the metal construction. It really gives it a professional feel. Shure's manufacturing is affordable and durable &quot;working class&quot; musicians. It's easier to grasp, and no visible screws or mounting threads to disrupt the mic's elegant lines.

I've owned mine for 3 years now. It's works great. Dependable, and produces a great sound. Gives you a clear, sharp sound. I like that you can change the frequency response. I have a very low voice. I haven't tried any other models before but I'm think of upgrading to the Shure KSM44. I figure, it's a higher price, and better quality than this, so I must be sick! This mic is great for beginning musicians and studio/home studio owners. It really brings your recording to the next level. You can use this mic for recording your voice, acoustic guitar, brass or woodwind instruments, the electric bass, drums, a chorus, room ambience, or crashing electric guitar amps for a clean tune. Both the acoustic environment and microphone placement have effects on the sound obtained when miking a source. You need to experiment with these to achieve the best overall sound for each instrument. I've tried many trial and errors. It really makes a couple of months to ready get what works the best. I was using this mic to record my crate guitar amp. I was thinking how can I record this right? Putting the mic in the center, on the side, directly in front of the cone? My first CD I decided to record the guitar with this mic. I realized that the standard of SM57's worked just fine. I think the mic is pricey, but the result is great. I don't see how you can have a $4,000 condenser mic and pick up everything, included what's going on outside. This is perfect. Just enough to pick up what you want. At $550, it's not too bad.
View price information
Did you find this review helpful?yesno

Shure KSM32
5
When I set out to buy a really good large condenser mic for my home studio, I actually hadn't even considered this mic. I went to Guitar Center looking to purchase a Neumann TLM 103 and was fully prepared to plunk down $900 for it. When I got to talking with the salesperson, however, he told me that I could save $450 and get a mic that, in his opinion, was just as good as the TLM 103. I had used the TLM 103 at a local studio, so I was fully acquainted with it's real-world performance. I frankly didn't believe him, but I figured he couldn't be lying if he was trying to sell me something CHEAPER than what I was prepared to buy unless he really meant what he was saying. At his reccomendation, I reluctantly bought the Shure KSM 32 (for $448) under the stipulation that I be able to return it if I wasn't happy. Boy, was I surprised!!! This is one awesome mic.

First of all, the mic comes packaged in a beautiful velveteen pouch and is tucked away in a sturdy metal flight case (along with an elastic shock mount which is also included). I tried it first on vocals (male and female both) and I was stunned with the accuracy and clarity of this microphone. The recorded voices seemed to take on an airy, crisp quality. The mic more than adequately captured the low end of my own voice and, based on some quick tests I did, it would seem to be an excellent mic for voice-over or narration type work as well. On acoustic guitars I was also pleasantly surprised at the trueness with which the KSM 32 captured the subtle nuances of my instrument. I tried several mic placements that I typically use, and it was clear to me that this would be my first choice for recording acoustic guitar. The mic also does a good job on percusssion instruments (tambourine, maracas) and I even tried it on a cello and it sounded great- deep, rich bass tones and an overall clear, well balanced sound. As I mentioned, this mic comes with a shock mount which I found to be easier to use than anything else I have ever tried and does a great job of eliminating unwanted noise when you accidentally bump the mic stand or stomp too loud on the floor. All in all, I don't believe there is a mic on the market at this price that can compare. Even if you are just starting out in home recording, you would be wise to pass up the AKG C3000 and save for this one. Don't get me wrong- I own a C3000 and it is a great mic for the price, but just a little patience to save the extra money is well worth it. This mic is truly world class.

Perhaps the only drawback to this unit is the fact that it is strictly cardioid. However, I understand that Shure has recently released the KSM 44 which is essentially the KSM 32 with the addition of figure 8 and omnidirectional patterns. If it's as good as this mic, I may have to buy one of those as well!

Appears to be very sturdy, although I wouldn't try dropping this (or any other) condenser mic on the floor to check it out. In terms of asthetics, this is a beautifully designed microphone, and really looks and feels like a "high end" piece of gear. As noted above, the flight case/storage pouch are nice additions as well.

Obviously, if you have $2,000 or more to spend you can find a better large condenser mic. But if, like most of us, you have a limited budget and really want to take your recordings to the next level, this is a mic you should strongly consider adding to your setup.

mister o's review (This content has been automatically translated from French)

Shure KSM32
5
It is a large electrostatic membrane, so we can put it anywhere.
It is very well for voice overhead but I find really good sr guitars, acoustic or before an amp.
It remains trs versatile jai made entire albums with him alone. (Cest to say).

I have since it came out 6 or 7 years and not one I bec downside.
I like it for its quality does not have the cot mtallique Chinese mics. and really it my sauv more than once, I am demanding and not really nice to him (falls, functioning for 2 months in Africa 45 degrees).
But it is always Fidler.
I know a large part of the march and microphones for the price hard to dfier sest.