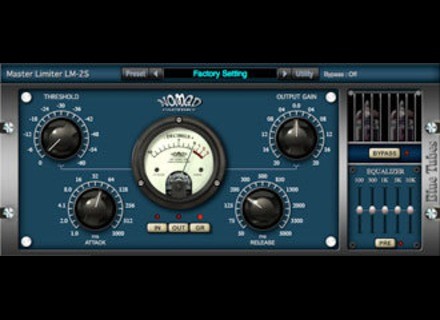 Nomad Factory BT Limiter LM-2S
4
The Nomad Factory BT Limiter LM-2S is a plug-in that is part of Nomad's Blue Tubes Dynamics Pack, which is a plug-in bundle consisting of six plug-ins in total of various dynamic processing plug-ins. I wasn't involved with installing this plug-in or bundle since I don't own it myself. We've got it installed on all of our systems at the studio where I work. The bundle is available across the board in terms of compatibility and formats, as it's made for both Mac and PC operating systems and comes in VST, RTAS, or AU formats. The plug-in itself is really simple and easy to use, as it's got a pretty user friendly interface and make up. It has only your basic parameters, consisting of knobs for threshold, output gain, attack, and release, which is really just your basic compressor/limiter configuration. The Blue Tubes Limiter LM-2S also has a five band graphic equalizer for further fine tuning. I haven't had a need to check out a manual for this plug-in nor do I anticipate ever needing to do so...

The studio complex where I work has the Nomad Factory BT Limiter LM-2S and the Blue Tubes Dynamics Pack running on all of our systems. I've mostly used it in our A Room, which is made up of Pro Tools HD and a Mac Pro desk top that has 10 GB of RAM and dual 2.66 Ghz Intel Xeon processors. It's a super fast computer to begin with, so when paired up with Pro Tools HD it's very rare that you're going to experience performance issues, so I can't say I've ever had a problem running this one.

While dubbed a 'Master Limiter,' the Nomad Factory BT Limiter LM-2S is useful for mixing as well, and in fact mixing is the only application that I've used this for. It's a bit more in depth than your average limiter since it has a mini graphic EQ as well, but the function is more or less the same as it would be for mixing or mastering. The sound of the LM-2S is pretty warm and full, but I've got other compression/limiting plug-ins that I tend to run before I will use this one, and when A/Bed with something of better quality you can definitely notice the difference pretty quickly. However, if you're looking to get a bunch of quality dynamic processing plug-ins in one place at a cheap price, the Blue Tubes Dynamics Pack is a great way to do so. You can't get this plug-in any other way, so if you're interested definitely check out the full bundle!
Did you find this review helpful?yesno
»